Join us for an upcoming webinar!

What is Airflow? Apache Airflow is a platform used to programmatically author, schedule, and monitor data pipelines. 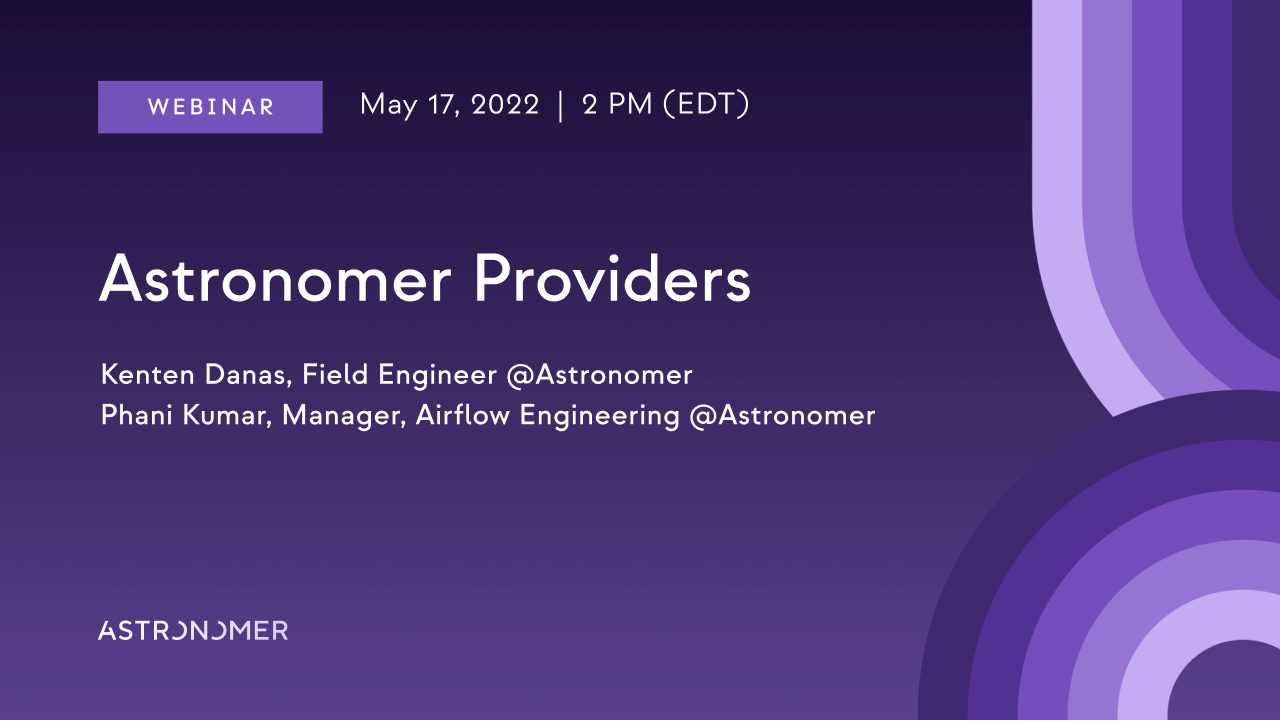 This webinar will dive into the Astronomer Providers repository, which includes Airflow Providers containing Deferrable Operators and Sensors created by Astronomer. We’ll go beyond the basics to look at key implementation details and best practices. 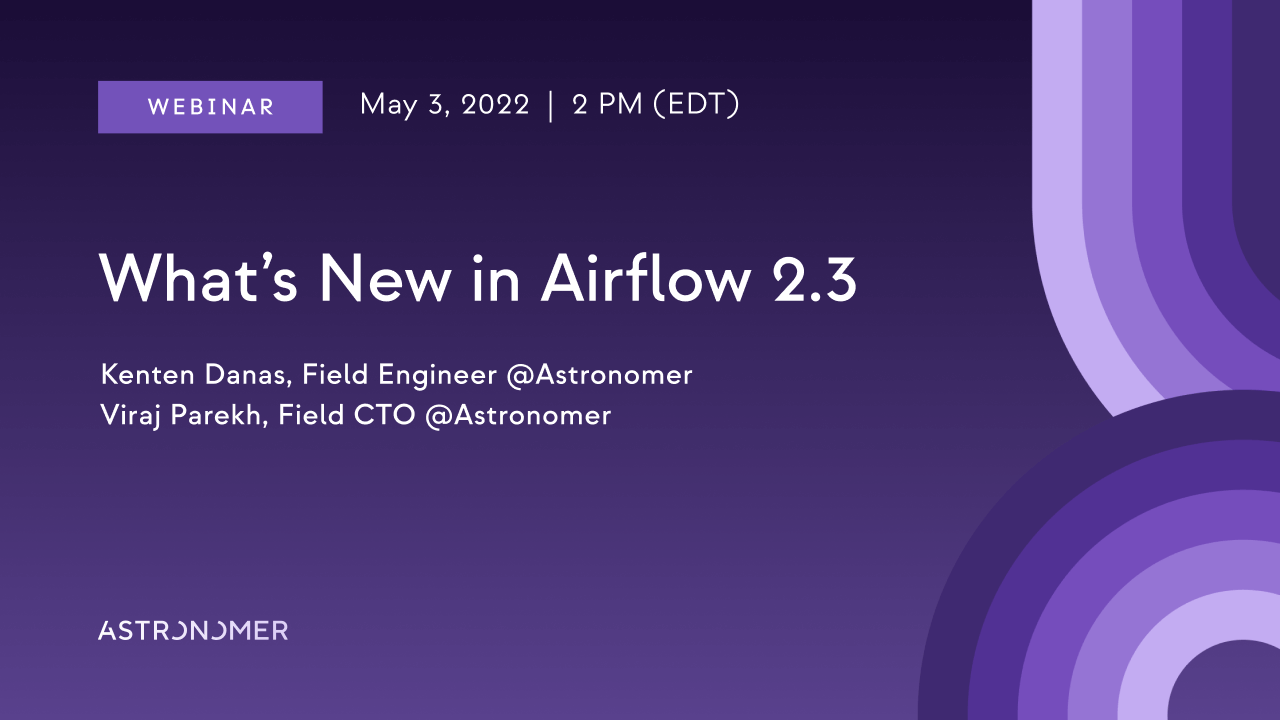 The Airflow project is rapidly evolving, with frequent releases bringing advancements in DAG authoring, observability, and project stability. We’re super excited for the release of Airflow 2.3, which comes with big changes in the flexibility of DAG creation, improvements to the Airflow UI, and much more. 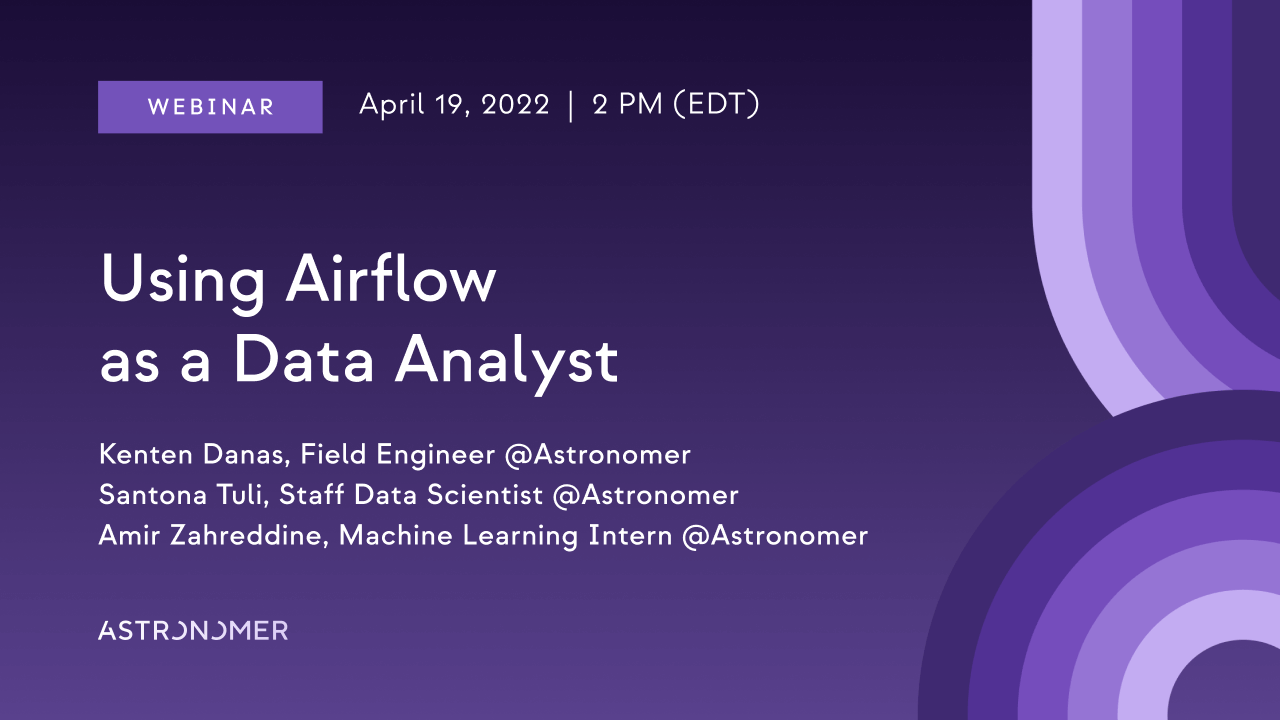 Using Airflow as a Data Analyst

Airflow is sometimes thought of as primarily a data engineering tool, but its use cases are really much broader. A data analyst’s workflow typically involves ingesting and transforming data to extract insights, then presenting the insights in a manner that allows business stakeholders to easily interpret trends and take appropriate action. Airflow’s ease of use and extensive provider ecosystem make it an ideal tool for orchestrating such analytics workflows. 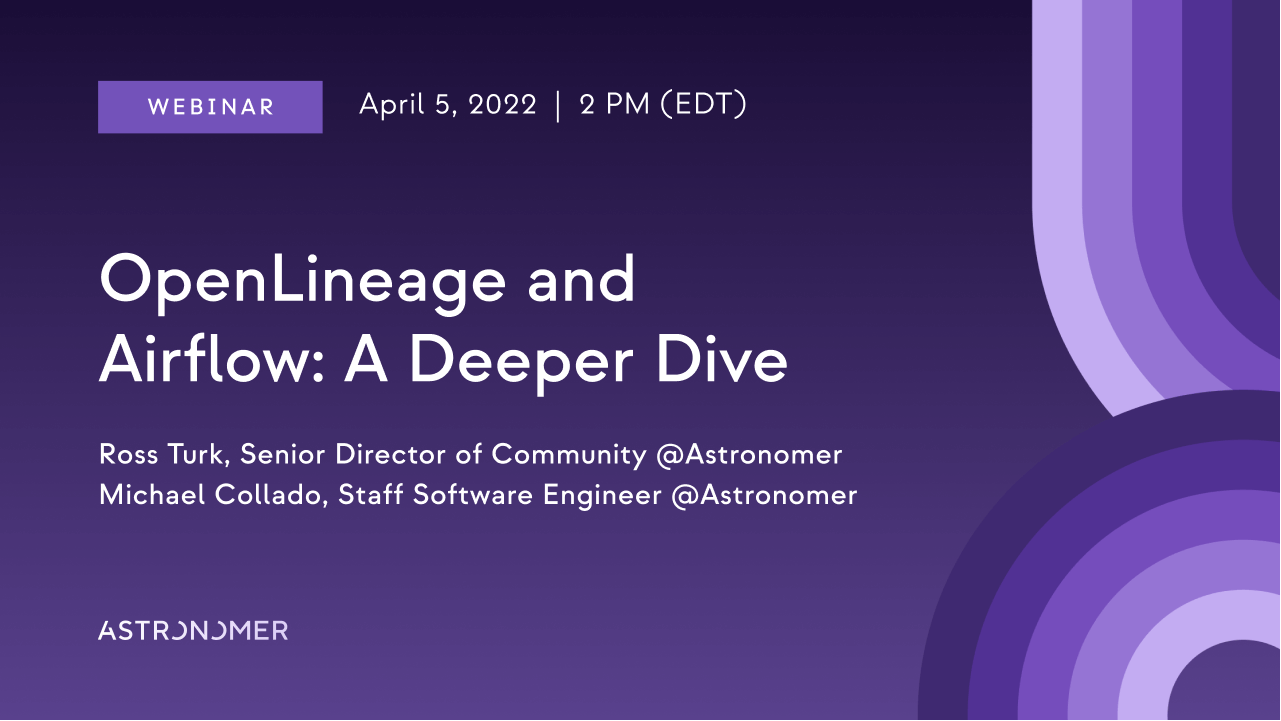 OpenLineage and Airflow: A Deeper Dive

Data lineage is the complex set of relationships between your jobs and datasets. Using OpenLineage with Apache Airflow, you can observe and analyze these relationships, allowing you to find and fix issues more quickly. This webinar will provide a deeper dive on OpenLineage, extending beyond the basics into key implementation details and best practices. 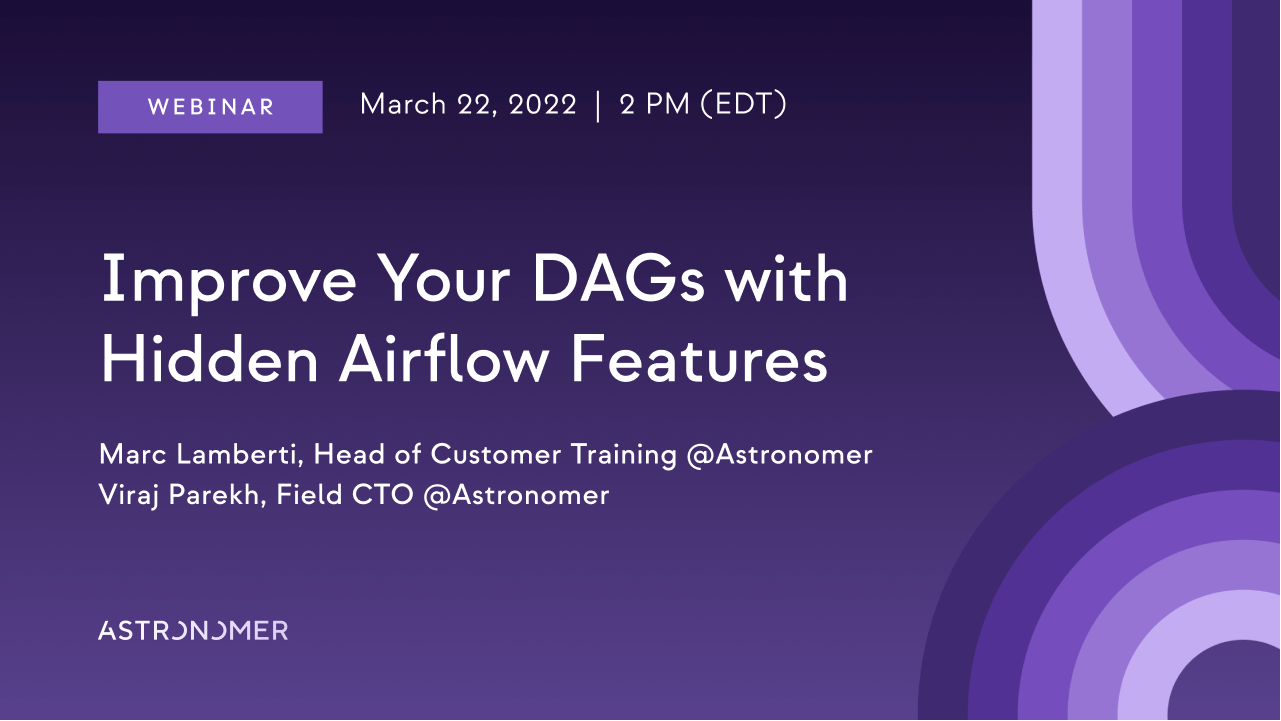 Apache Airflow is flexible and powerful. It has a rich ecosystem and an incredibly active community. But are you sure you haven’t missed anything? A new feature or concept that could put your DAGs at another level? It can be challenging to keep up with the latest Airflow features, and sometimes we miss the most useful ones. For this webinar, I'd like to introduce you to a couple of lesser-known features of Apache Airflow that can dramatically improve your data pipelines. 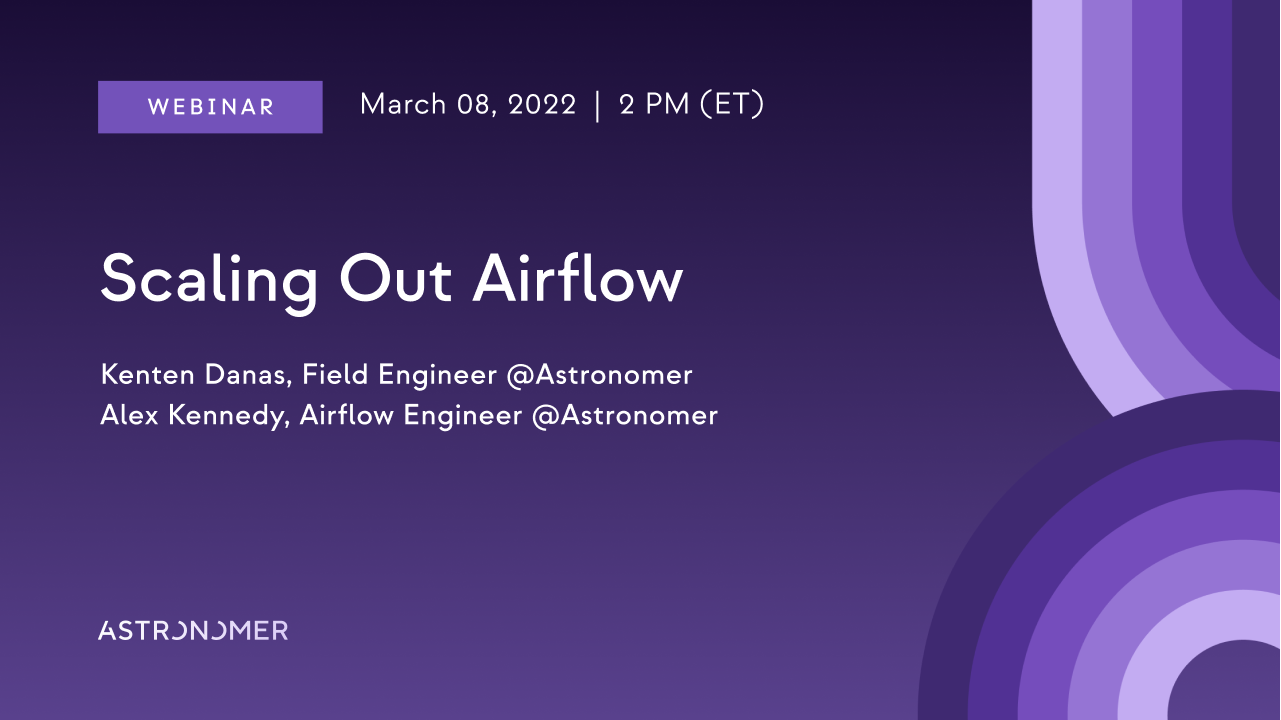 Airflow is purpose-built for high-scale workloads and high availability on a distributed platform. Since the advent of Airflow 2.0, there are even more tools and features to ensure that Airflow can be scaled to accommodate high-throughput, data-intensive workloads. In this webinar, Alex Kennedy will discuss the process of scaling out Airflow utilizing the Celery and Kubernetes Executor, including the parameters that need to be tuned when adding nodes to Airflow and the thought process behind deciding when it’s a good idea to scale Airflow, horizontally and vertically. Consistent and aggregated logging is key when scaling Airflow, and we will also briefly discuss best practices for logging on a distributed Airflow platform, as well as the pitfalls that many Airflow users experience when designing and building their distributed Airflow platform. 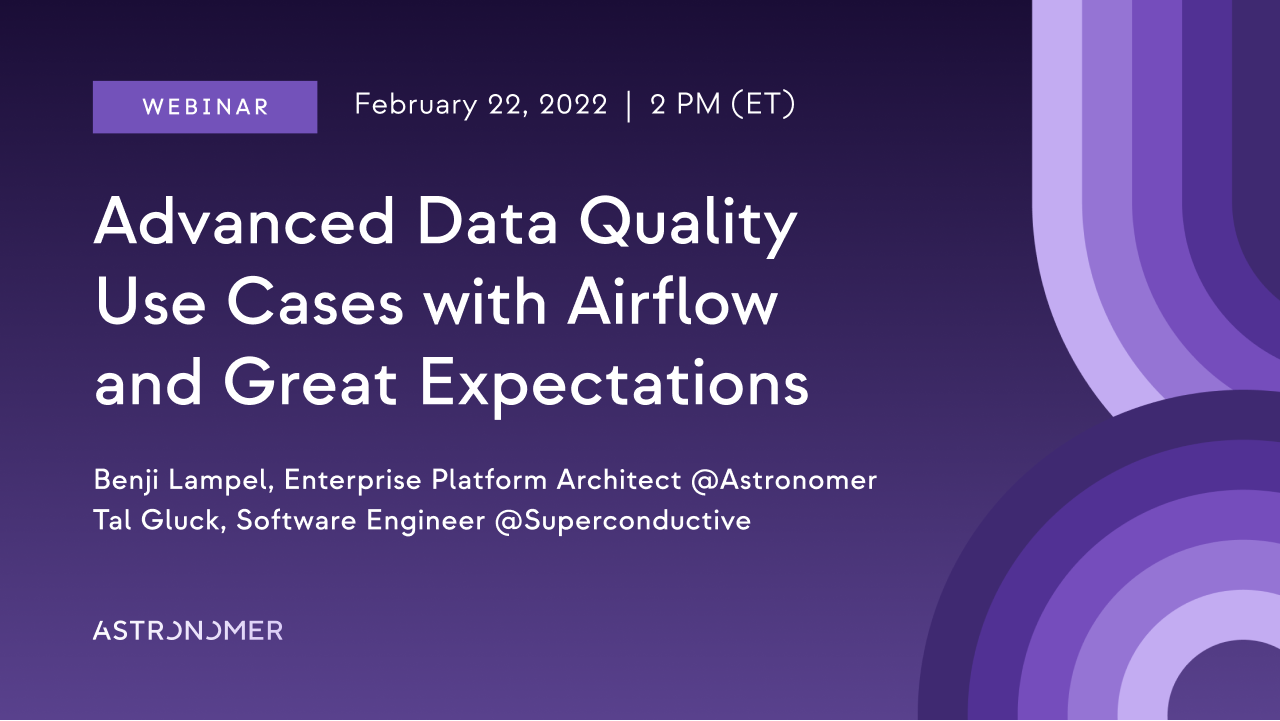 Advanced Data Quality Use Cases with Airflow and Great Expectations 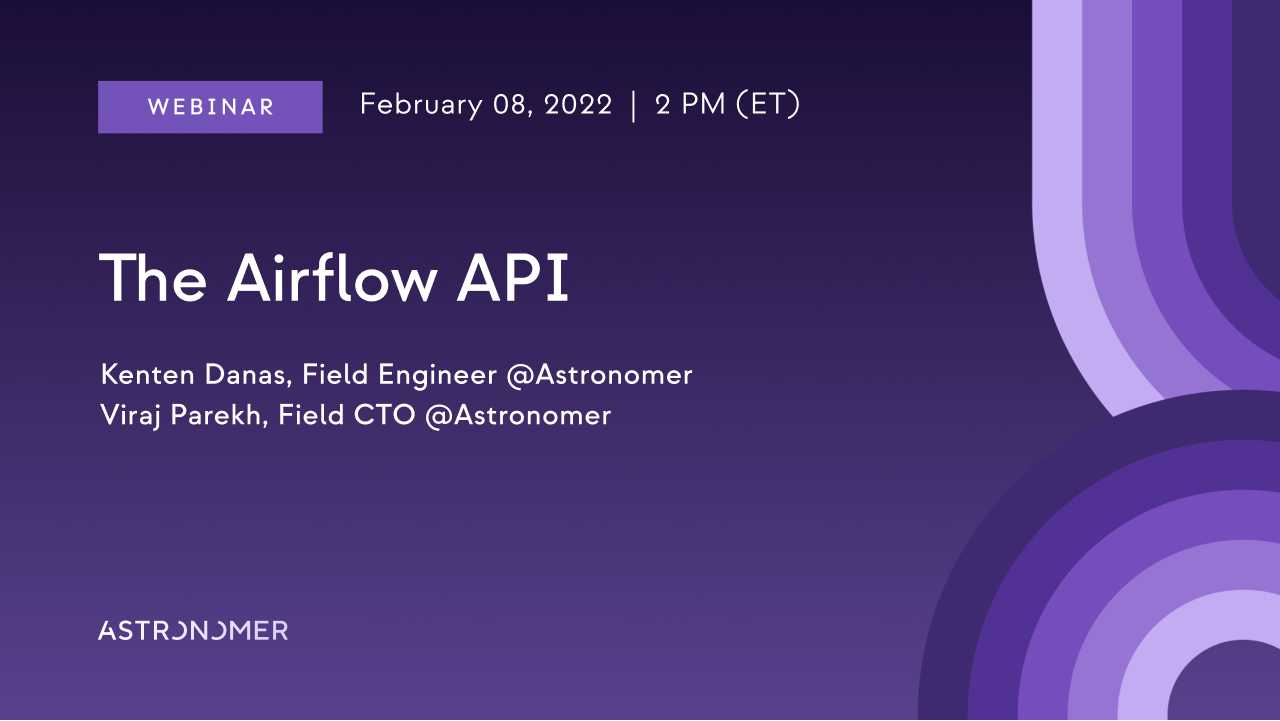 Did you know that Airflow has a fully stable REST API? In this webinar, we’ll cover how to use the API, and why it’s a great tool in your Airflow toolbox for managing and monitoring your data pipelines. 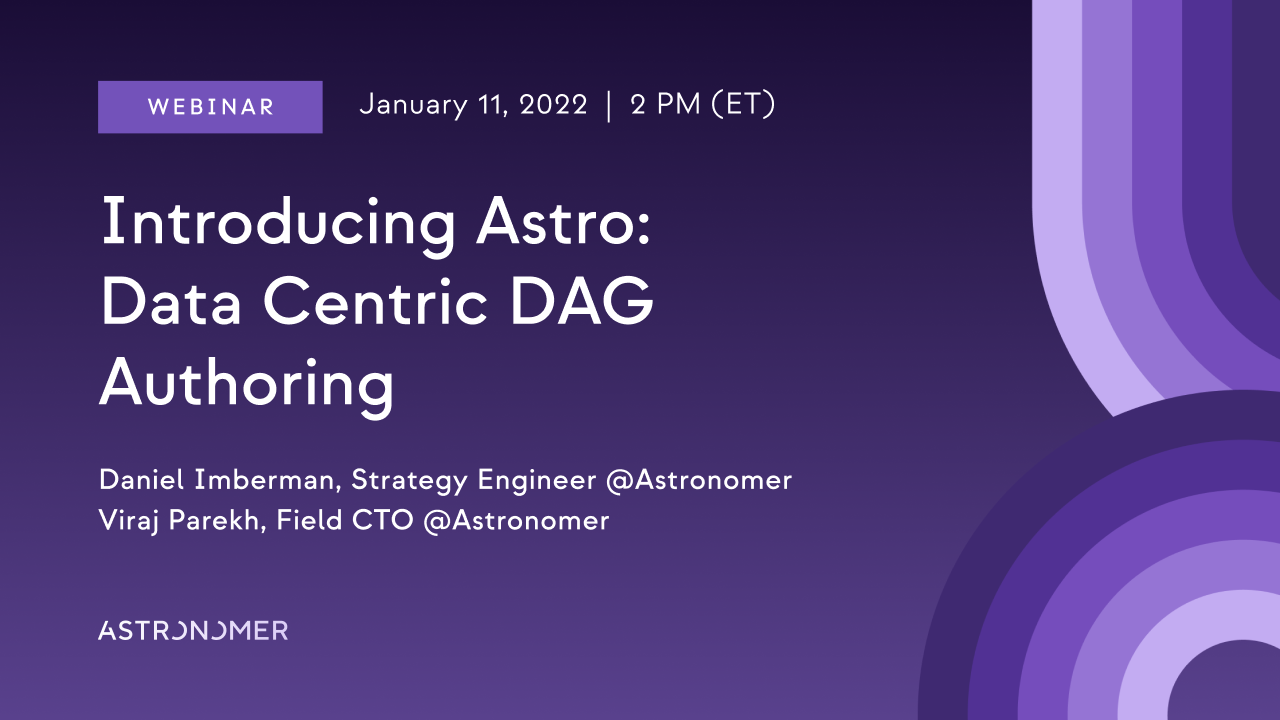 With Airflow 2.0, we introduced the concept of providers. We’re taking that to the next level with Astro, a new DAG writing experience, brought to you by Astronomer. 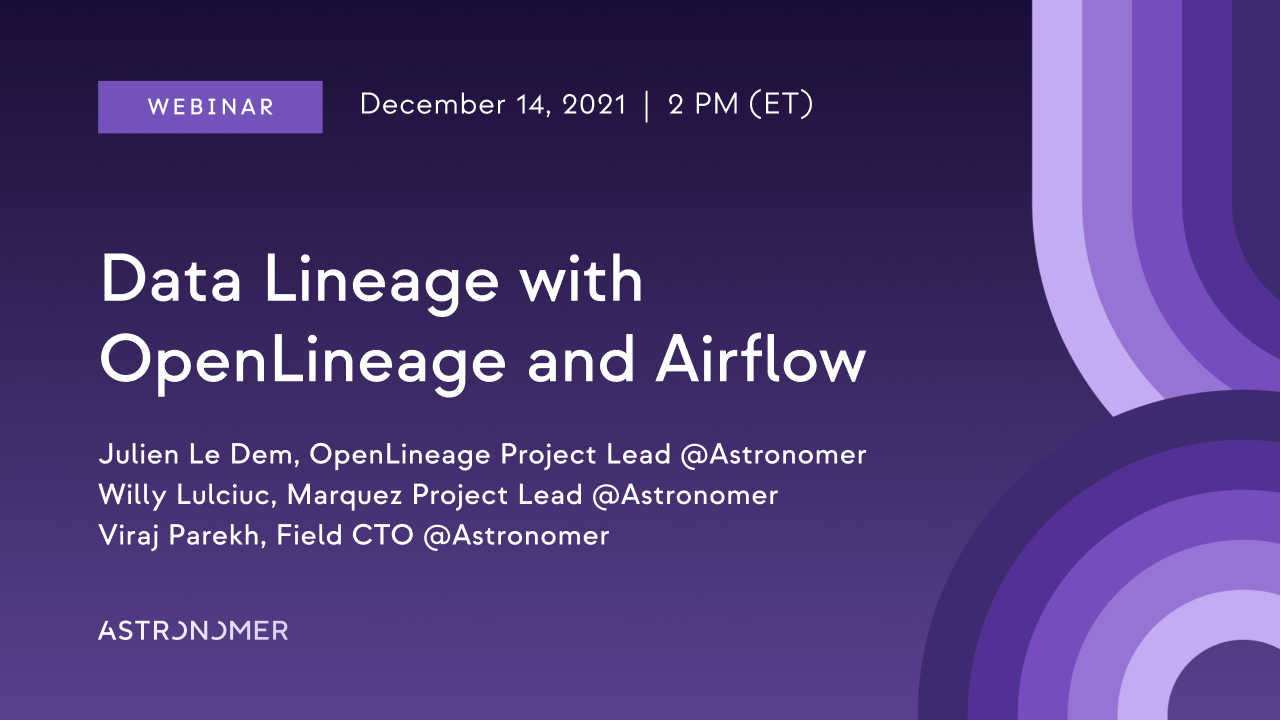 If one out of your hundreds of DAGs fails, how do you know which downstream datasets have become out-of-date? The answer is data lineage. Data lineage is the complex set of relationships between your jobs and datasets. In this webinar, you'll learn how to use OpenLineage to collect lineage metadata from Airflow and assemble a lineage graph - a picture of your pipeline worth way more than a thousand words. 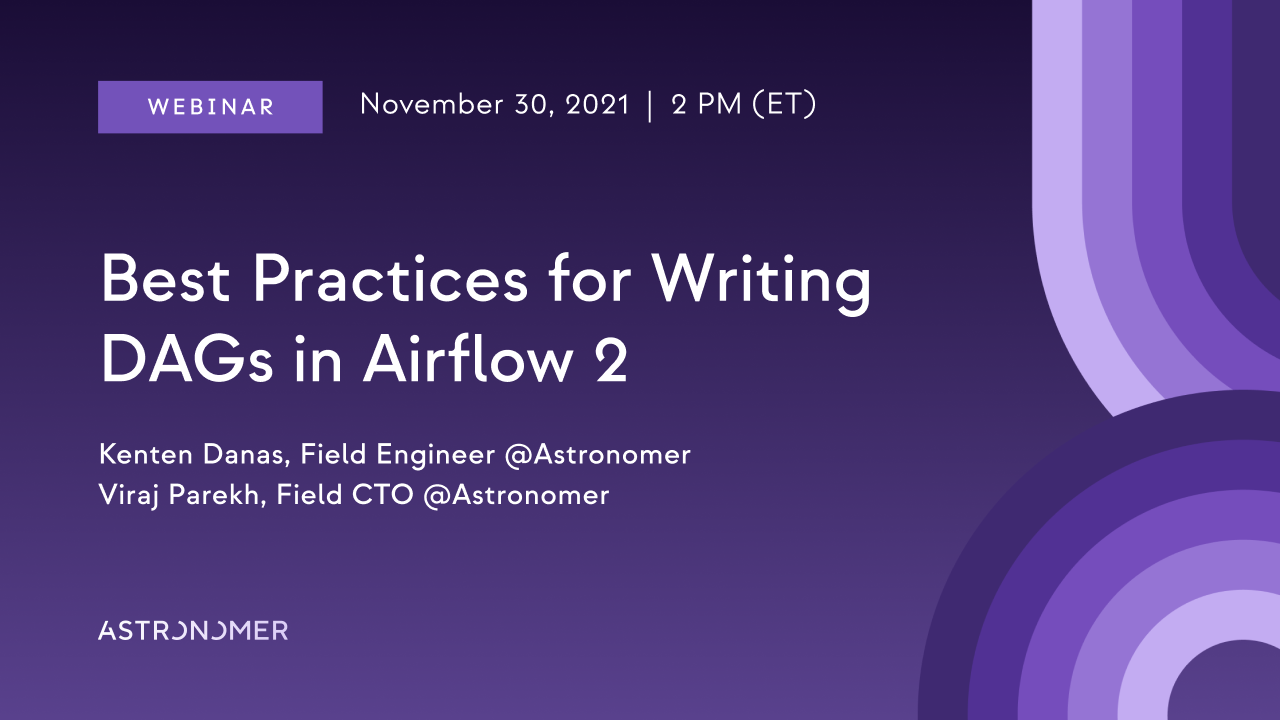 Because Airflow is 100% code, knowing the basics of Python is all it takes to get started writing DAGs. However, writing DAGs that are efficient, secure, and scalable requires some Airflow-specific finesse. In this webinar, you’ll learn the best practices for writing DAGs that will ensure you get the most out of Airflow. We’ll include a reference repo with DAGs you can run yourself with the Astro CLI. 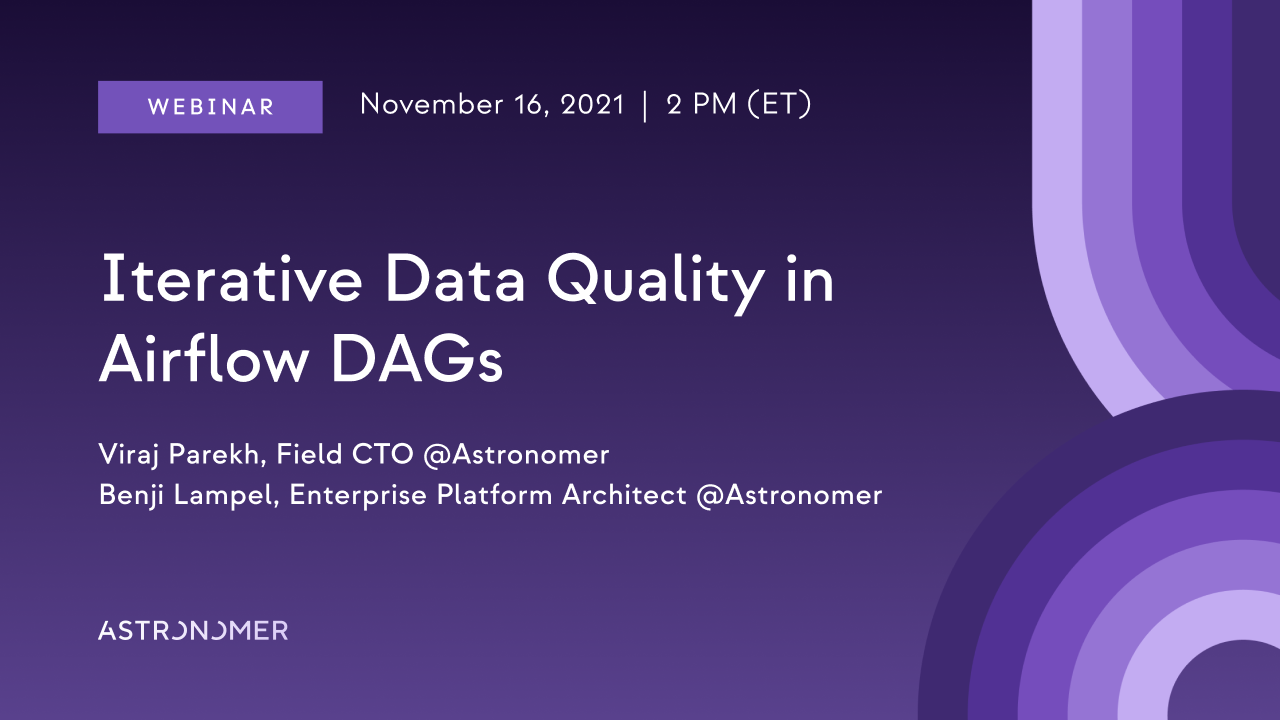 Data quality is an often overlooked component of data pipelines. Learn why it is a valuable part of data systems and how to get started integrating data quality checks into existing pipelines with a variety of tools. 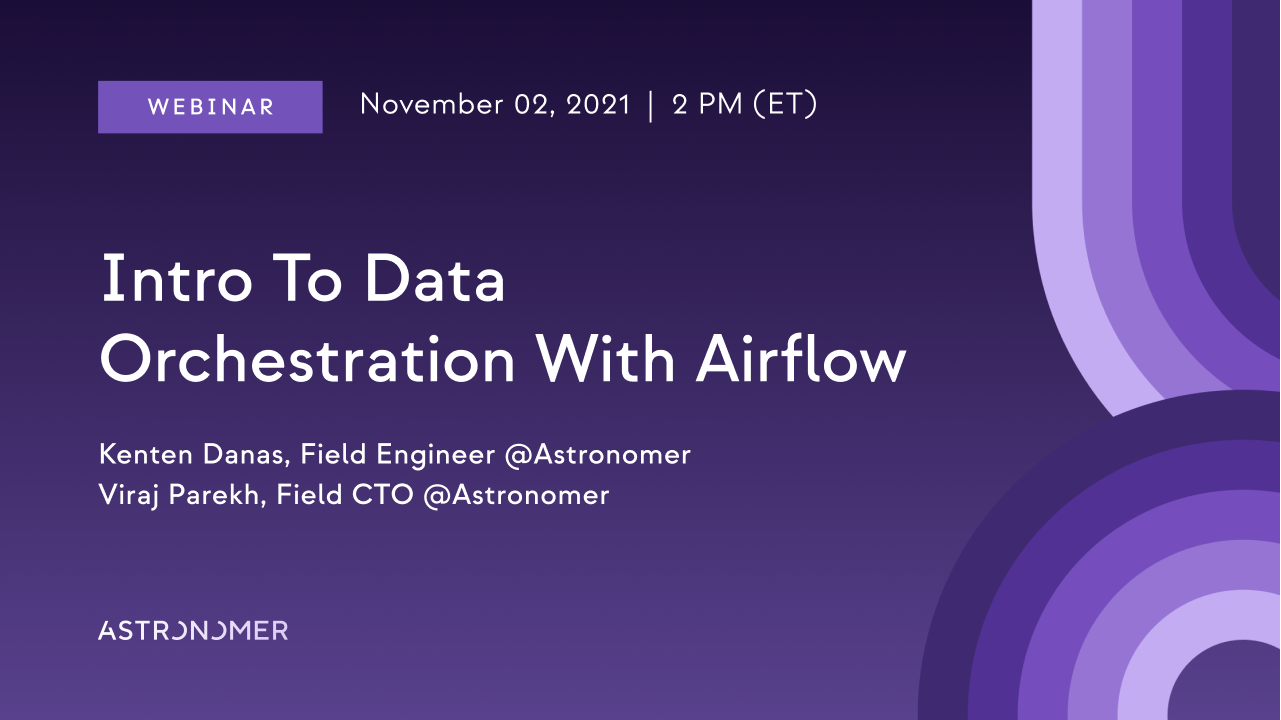 What is Airflow? Definition: Apache Airflow is a way to programmatically author, schedule and monitor data pipelines. 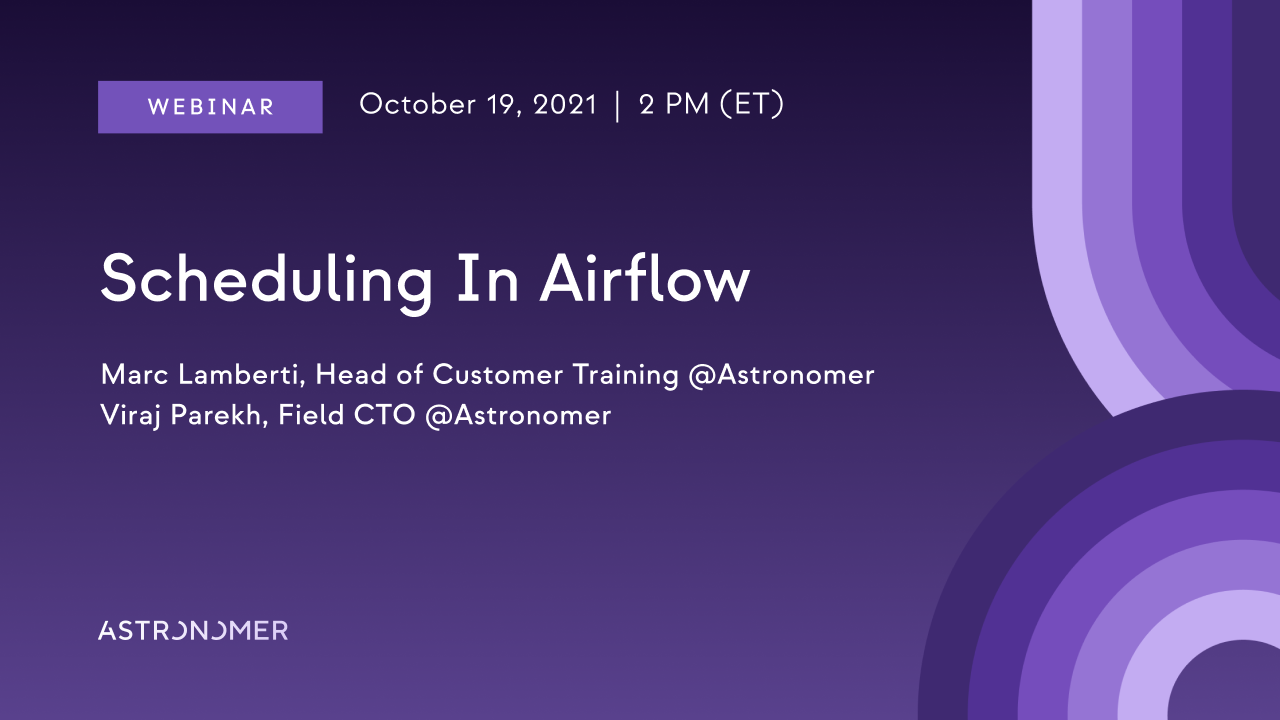 The flexibility and freedom that Airflow offers you is incredible, but to really take advantage of it you need to master some concepts first, one of which has just been released in Airflow 2.2 By the end of the webinar, you will be able to define schedule intervals that you thought were impossible before. 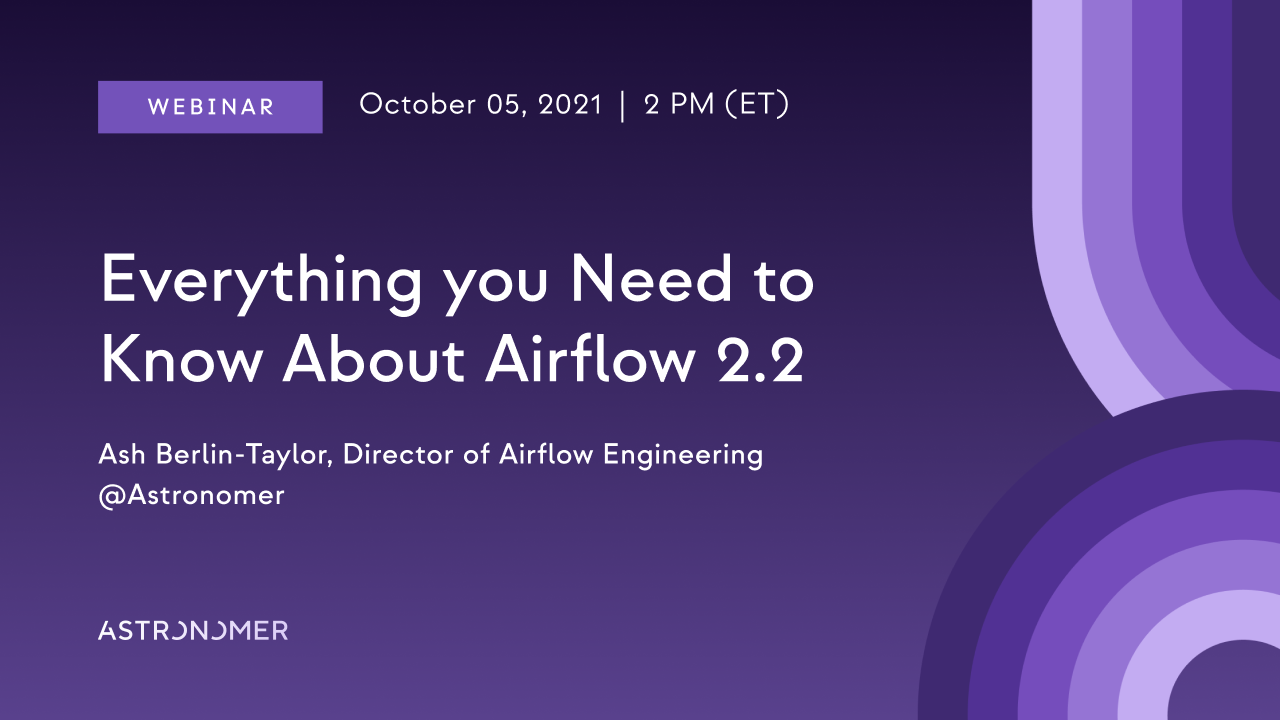 Everything you Need to Know About Airflow 2.2 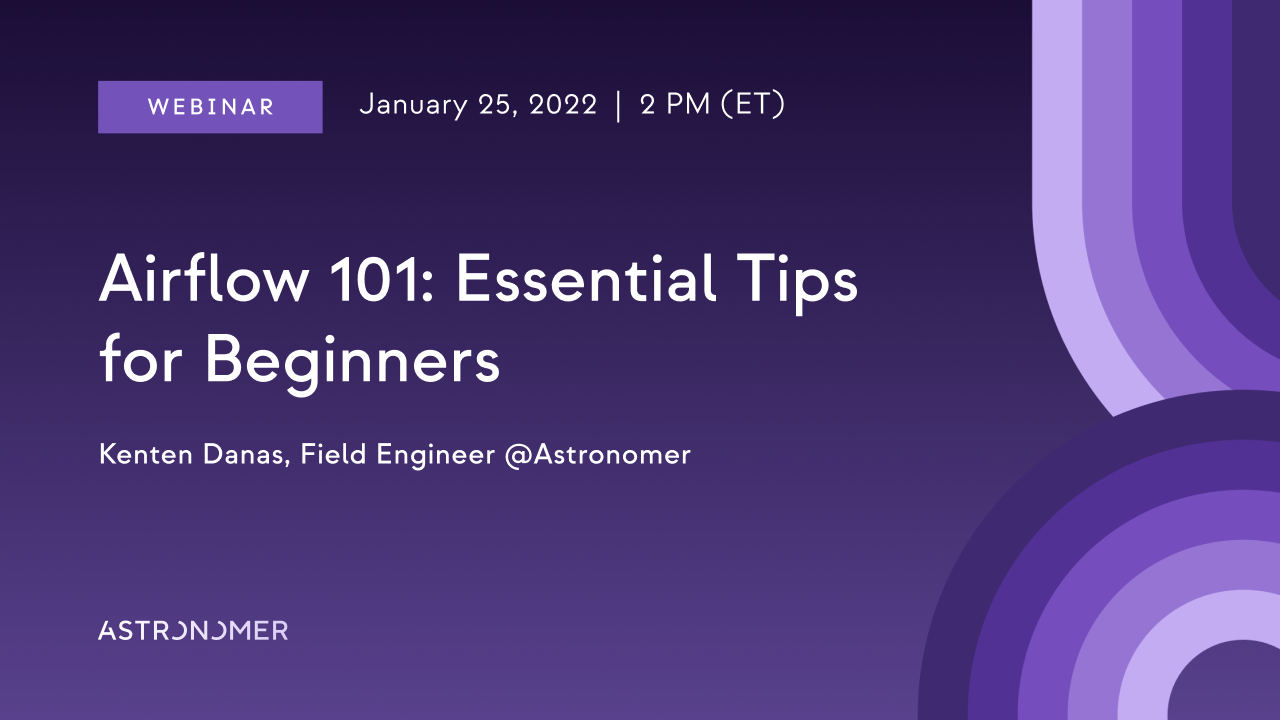 Airflow, by nature, is an orchestration framework, not a data processing framework. At first sight it can be unclear how to test Airflow code. Are you triggering DAGs in the UI to validate your Airflow code? In this webinar we'll demonstrate various examples how to test Airflow code and integrate tests in a CI/CD pipeline, so that you're certain your code works before deploying to production. 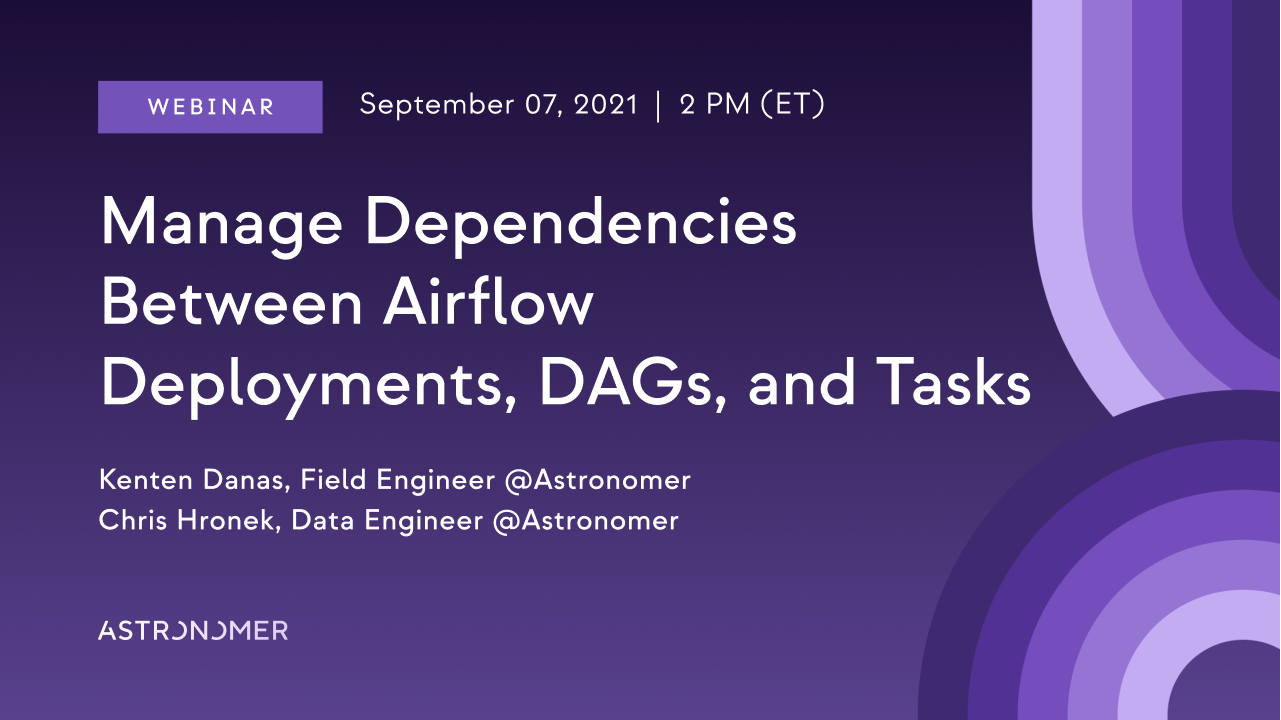 More often that not, your Airflow components will have a desired order of execution particularly if you are performing a traditional ETL process—for example, before the Transform step in ETL, Extraction had to have happened in an upstream pipeline. In this webinar we will discuss how to properly setup dependencies and define an order of execution or operation for your pipelines using dependencies. 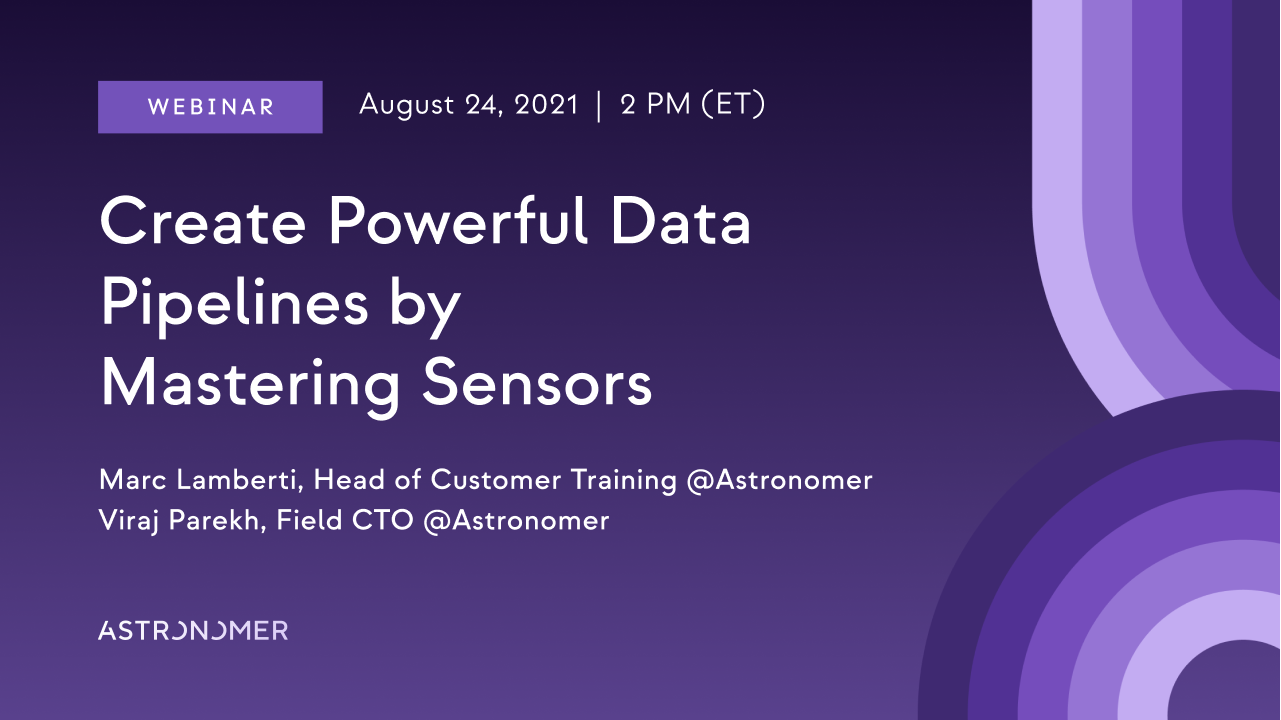 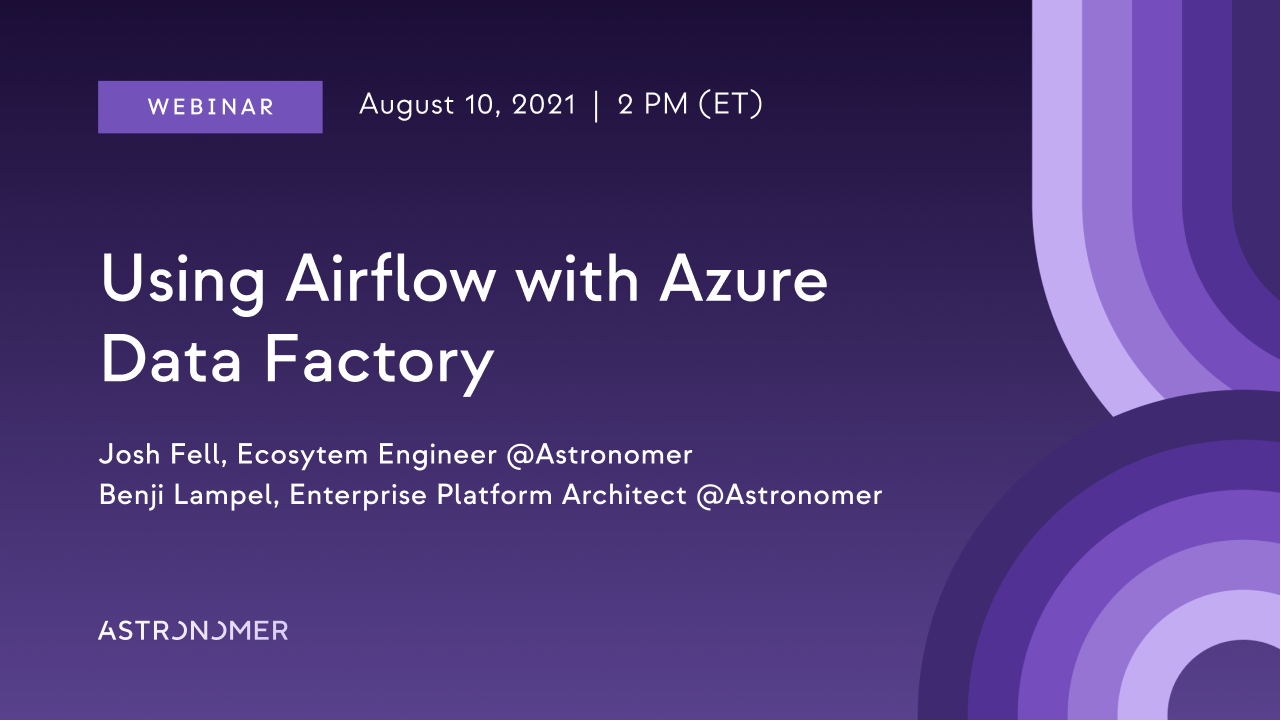 While Airflow and ADF (Azure Data Factory) have pros and cons, they can be used in tandem for data pipelines across your organization. In this webinar, we’ll cover how using the two together can really get you the best of both worlds! 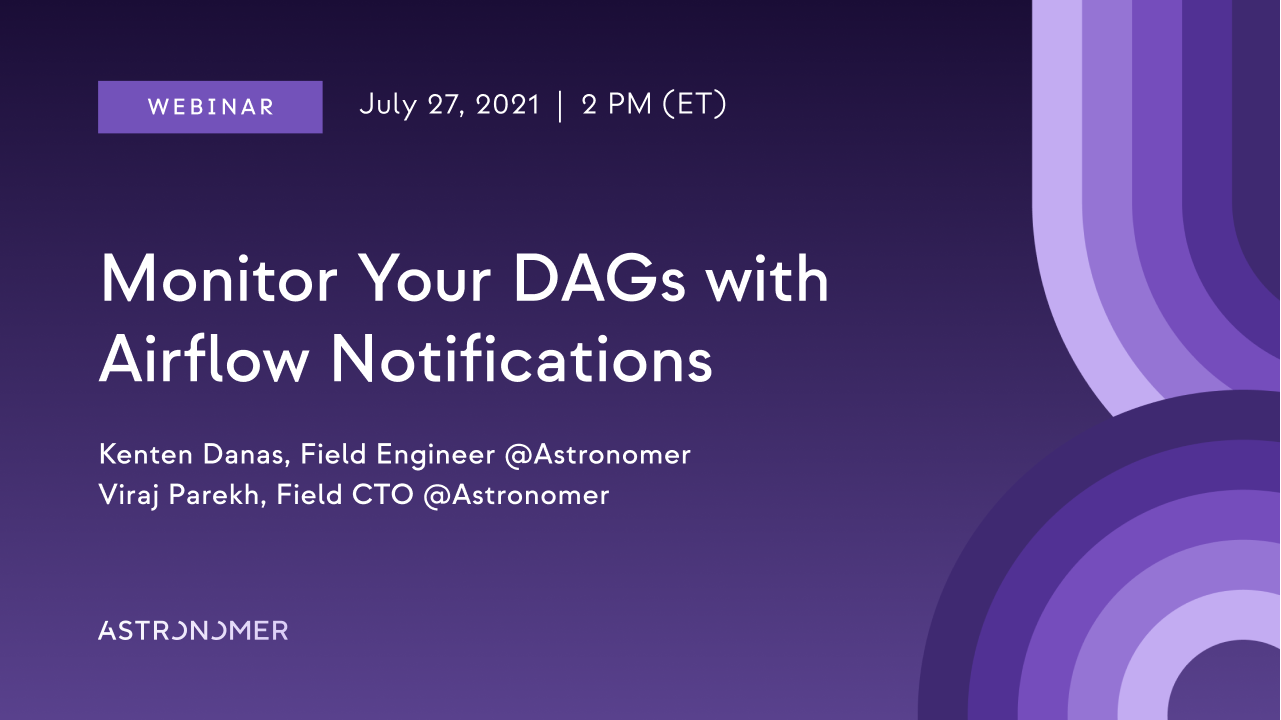 Monitor Your DAGs with Airflow Notifications

Anytime you’re running business critical pipelines, you need to know when something goes wrong. Airflow has a built in notification system that can be used to throw alerts when your DAGs fail, succeed, or anything in between. In this webinar, we’ll do a deep dive into how you can customize your notifications in Airflow to meet your needs. 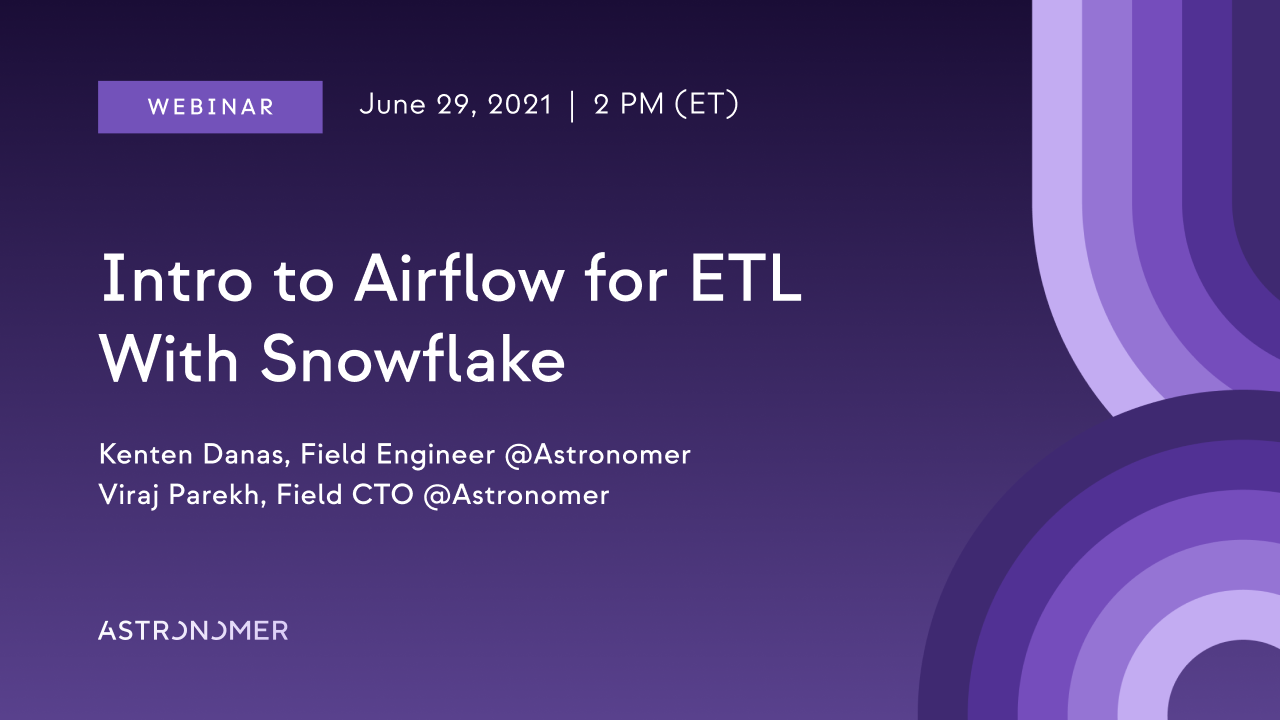 ETL is one of the most common data engineering use cases, and it's one where Airflow really shines. In this webinar, we'll cover everything you need to get started as a new Airflow user, and dive into how to implement ETL pipelines as Airflow DAGs. 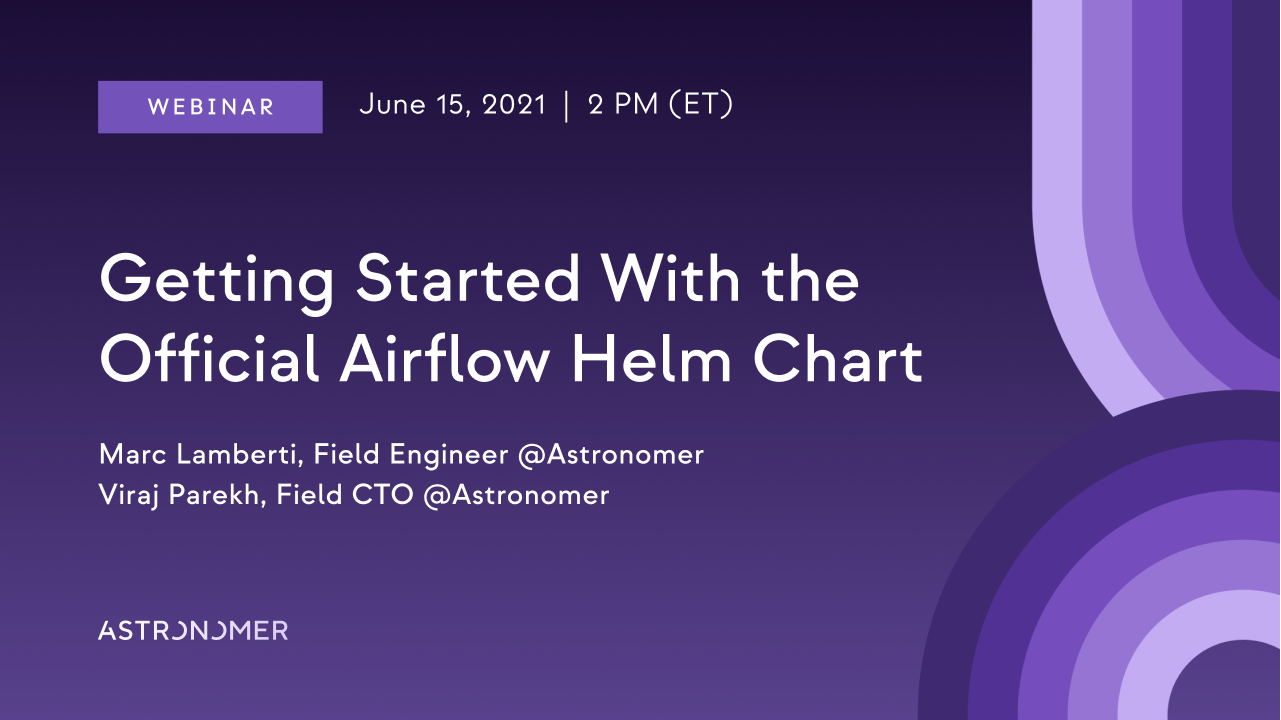 Getting Started With the Official Airflow Helm Chart

The official helm chart of Apache Airflow is out! The days of wondering what Helm Chart to use in production are over. Now, you only have one chart maintained and tested by Airflow PMC members as well as the community. It’s time to get your hands on it and take it for a spin! At the end of the webinar, you will have a fully functional Airflow instance deployed with the Official Helm Chart and running within a Kubernetes cluster locally. 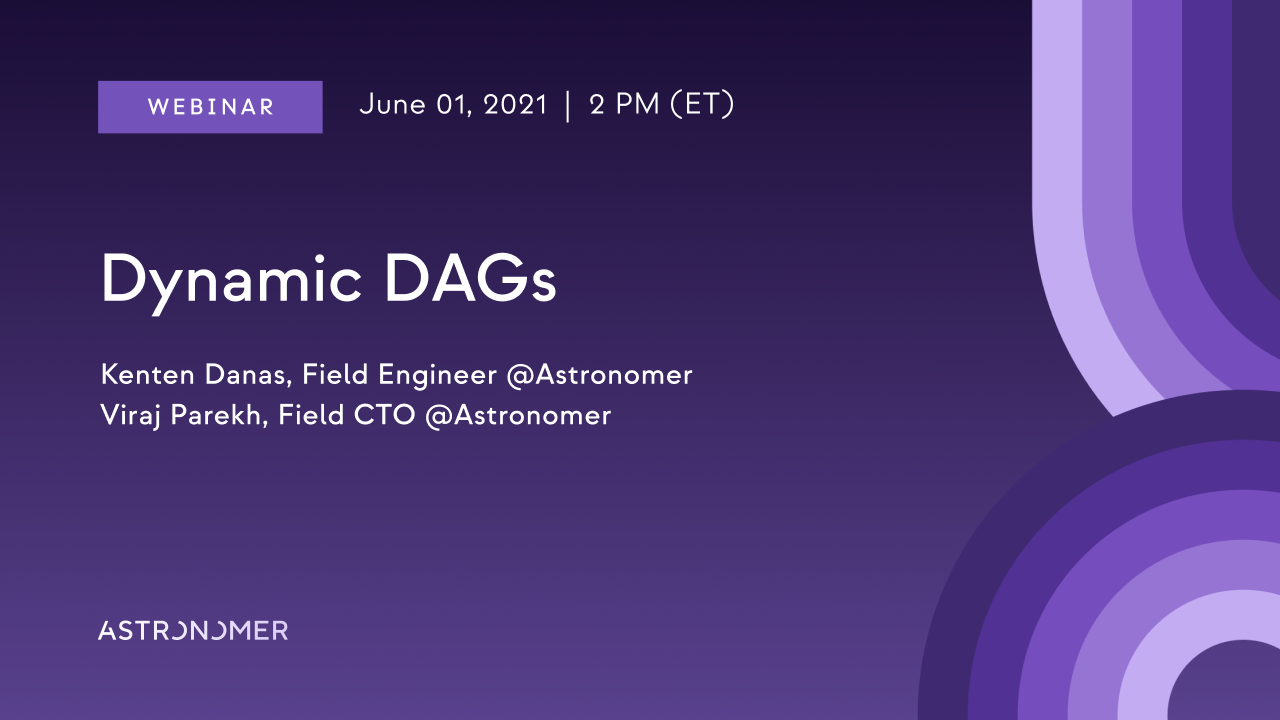 In this webinar, we'll talk about when you might want to dynamically generate your DAGs, show a couple of methods for doing so, and discuss problems that can arise when implementing dynamic generation at scale. 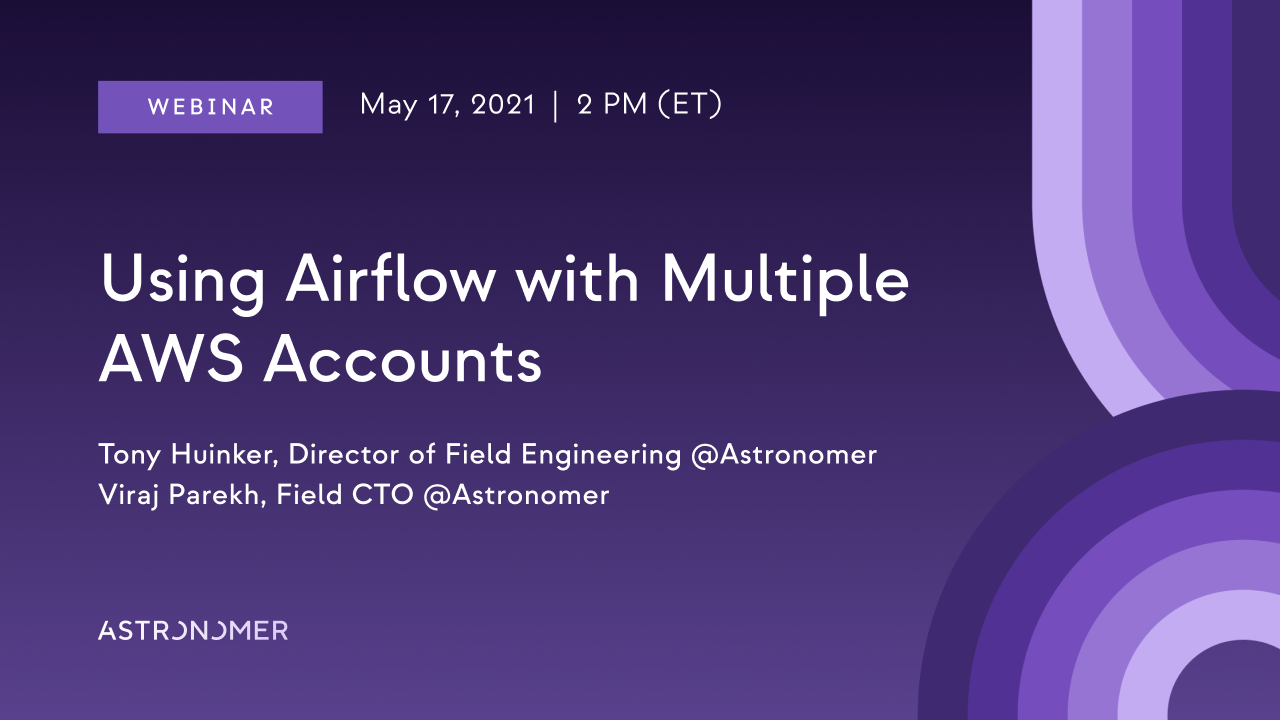 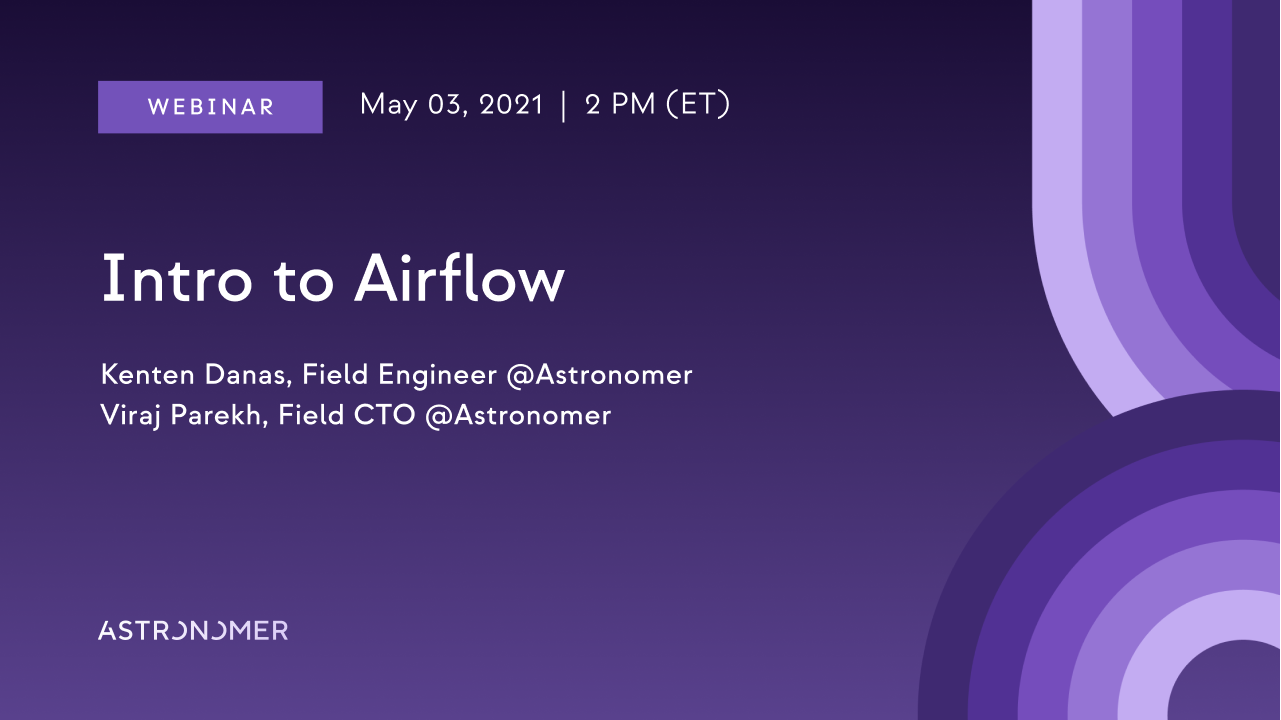 Learn about the core concepts, components, and benefits of working with Airflow. Watch this Intro to Airflow webinar today! 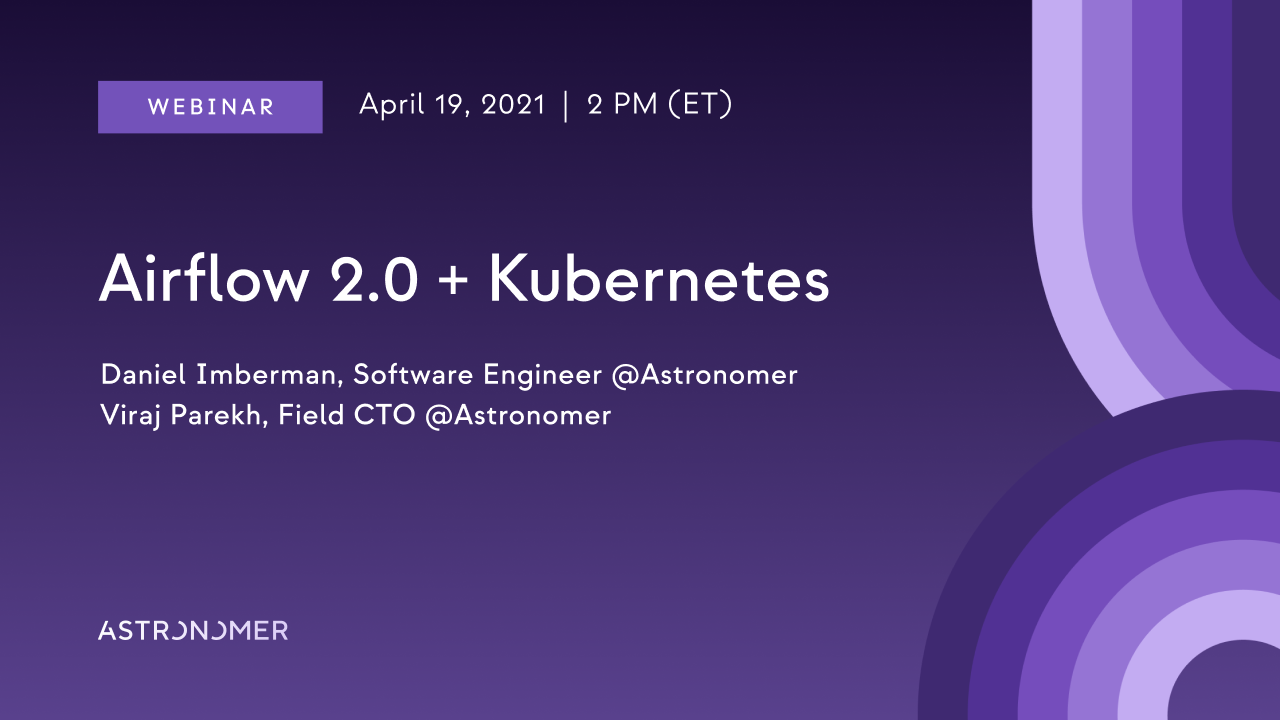 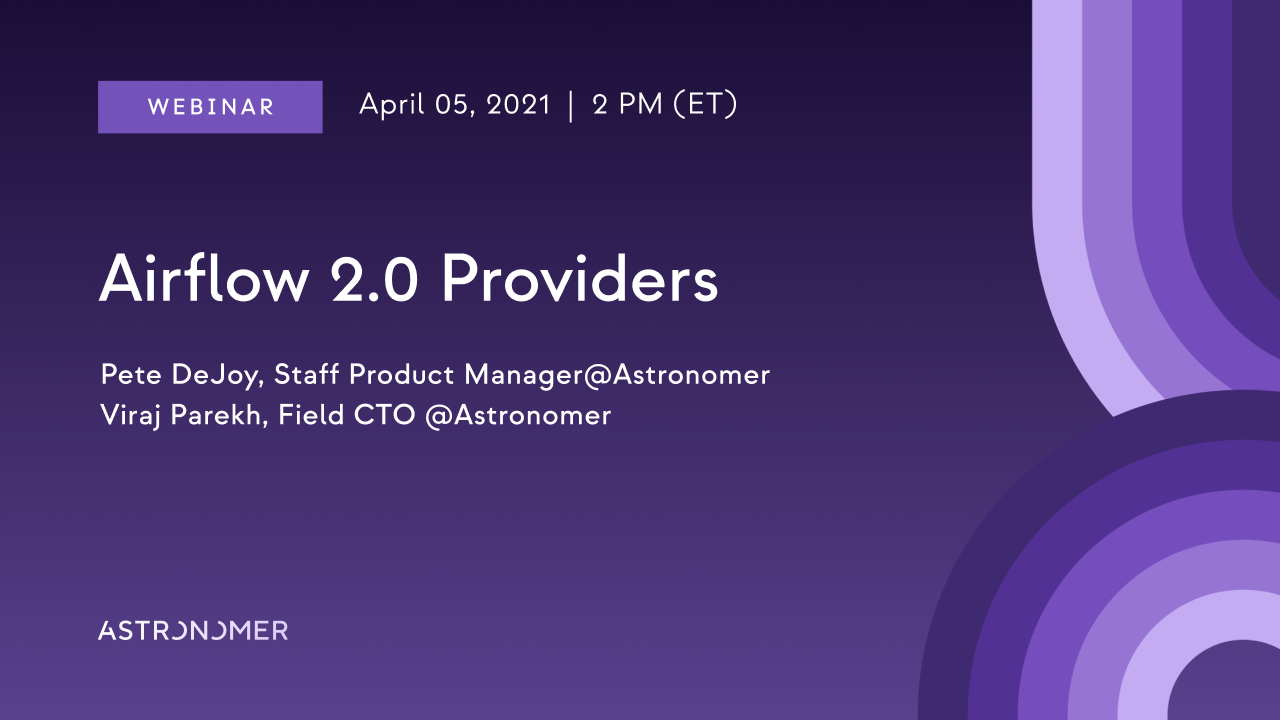 Learn everything about Airflow 2.0 providers including what defines a provider, how to create your own provider, and customizing provider packages. 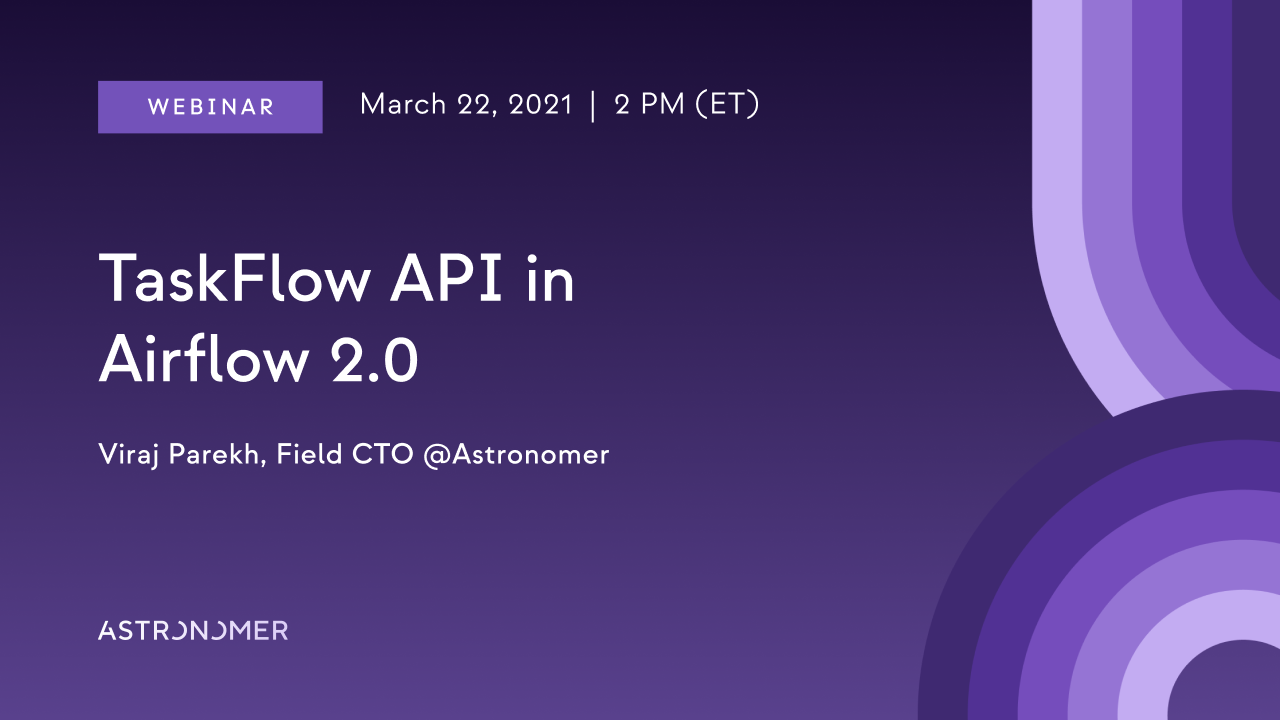 Watch the webinar recap and learn how Taskflow API can help simplify DAGs that make heavy use of Python tasks and XComs. 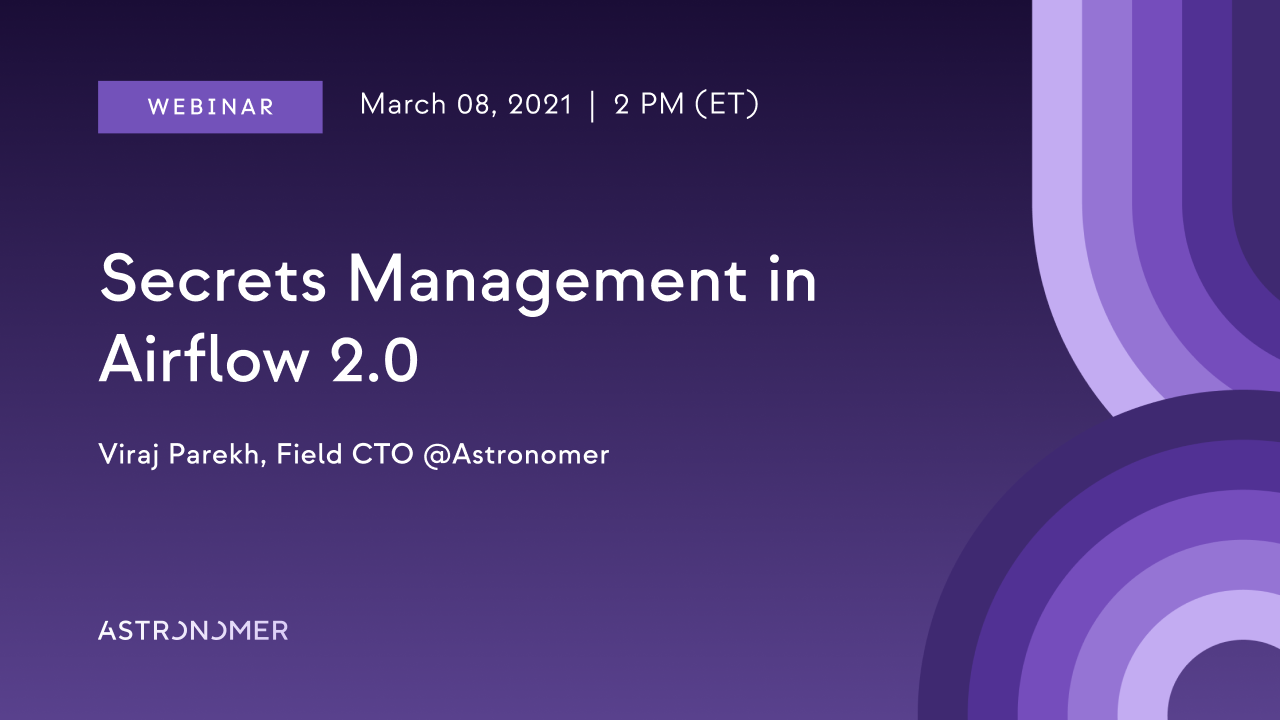 Watch the webinar recording to learn the best practices for managing secrets with various backends in Apache Airflow 2.0. 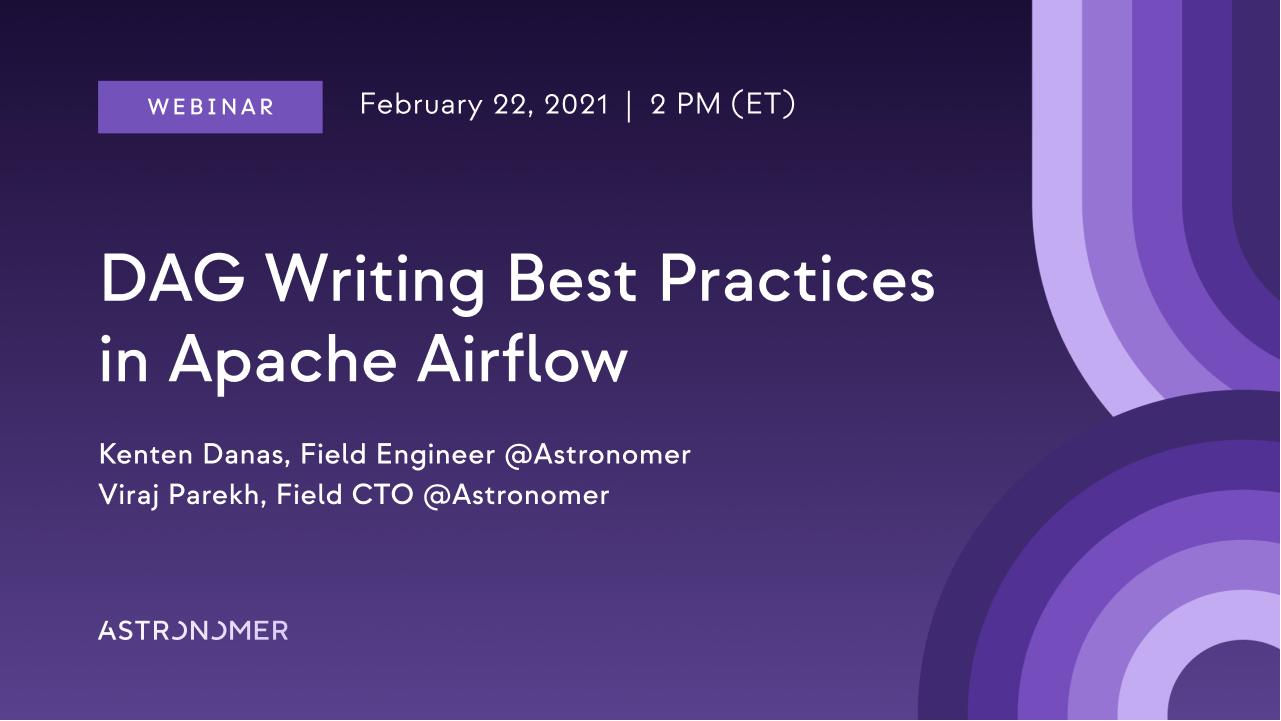 Learn the best practices for writing DAGs in Apache Airflow with a repo of example DAGs that you can run with the Astro CLI.