In December 2020, the Apache Airflow project took a huge step forward with the release of Airflow 2.0. One of the main new features in this release was the TaskFlow API, which was introduced to solve the challenge of explicitly passing messages between Airflow tasks. The TaskFlow API abstracts the task and dependency management layer away from users, which greatly improves the experience of working with XComs.

One of the features of the TaskFlow API that increases the flexibility of XComs is support for a custom XCom backend. This means that rather than store XComs in Airflow’s metadata database by default, you can push and pull XComs to and from an external system such as S3, GCS, or HDFS. You can also implement your own serialization / deserialization methods to define how XComs are handled.

If you’re new to working with XComs or the TaskFlow API and want some background before diving into custom XCom Backends, check out the Airflow documentation on XComs and our webinar on using the TaskFlow API.

When to Use Custom XCom Backends

Before we dive into the details on how to set up an XCom backend, we want to briefly touch on when you might want to do so and, importantly, when you might not.

XCom backends provide much more flexibility than you would have using traditional XComs with Airflow’s metadata database. When using a custom XCom backend:

This is more ideal for production environments because you can more easily manage what happens to your XComs over time, and you don’t need to worry about periodically cleaning up the metadata database with another DAG.

All of this can be great if you want to pass information between your tasks flexibly and sustainably, such as when you are using an operator that returns metadata by default. However, even though a custom XCom backend will allow you to pass more data between your tasks, Airflow is still not designed to be a processing framework.

XComs were designed to pass messages between your tasks, such as metadata or other small amounts of data. If you want to pass large amounts of data between tasks, we recommend using an external processing framework such as Apache Spark, and using Airflow only for orchestration.

For more information on these concepts, read Passing Data Between Airflow Tasks.

The GreatExpectationsOperator can be used in Airflow DAGs to perform data quality checks before moving to downstream tasks (for more information on using Great Expectations with Airflow, check out our guide on the topic). The operator returns various results from the tests that were run on your data.

Because these results are not returned in a JSON serializable format, the only way to use them with the default XCom backend is to enable XCom pickling. Given the security implications of pickling, this is not ideal for a production environment.

These drawbacks can be solved by implementing a custom XCom backend which programmatically handles the results and saves them to an external file system.

Setting Up an XCom Backend

In this section, we’ll cover the general steps for setting up an XCom backend with Airflow. Note that the steps here assume you are running Airflow in a Dockerized set-up. If you are using Astronomer, see the next topic for detailed instructions on how to complete these steps on the platform.

The first step to setting up a custom XCom backend is to configure the backend you want to use. This guide describes how to set up an S3 backend on AWS, but the process would be similar if you used another service such as Azure blob storage or GCS.

The next step is defining a connection so your Airflow environment can connect to your custom backend. To do so for this example with S3, you can either define the AIRFLOW_CONN_AWS_DEFAULT environment variable, or set up an aws_default connection in the UI.

For this example, we set up the connection in the UI. Using the access credentials from the user generated in the section above, that looks something like this: 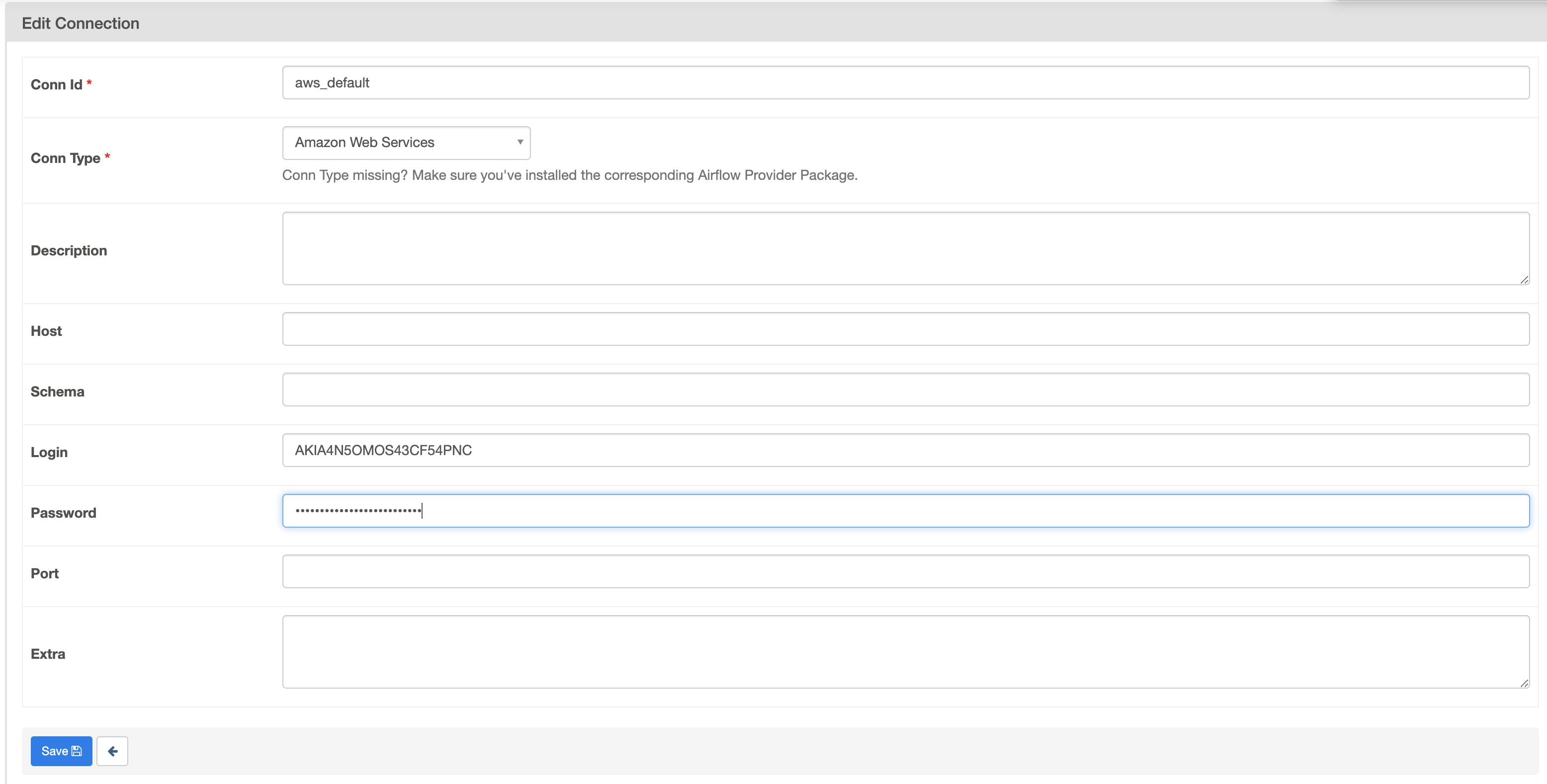 The main benefit to implementing a custom method here is that unlike regular XComs, which only allow for JSON serializable messages, you can handle any datatype in whatever way suits your use case. Your custom XCom backend class will inherit from Airflow’s BaseXCom class, so you may want to start by reviewing that code to see how it works.

Now, to add this class to your Airflow environment, complete the following steps:

Note: to run this docker-compose example, you need to set your Python Path in your docker-compose.yaml file (e.g. PYTHONPATH: /opt/airflow/).

When you restart Airflow and run a DAG with pandas dataframe XComs, you should see those XComs get pushed to your S3 backend:

Note: if you make any changes to your XCom Backend class by modifying s3_xcom_backend.py, you will need to restart Airflow (in this example, with docker-compose down && docker-compose up -d) for those changes to take effect.

Now that we’ve shown the general steps for setting up a custom XCom backend, in this section we’ll show how to apply those steps when working with Airflow on Astro. For this example, we’ll use the Great Expectations use case for storing operator results XComs as described above.

Note: All supporting code for this section can be found in this repo.

First, use the following steps to configure your XCom backend on Astro:

For this example, we have created serialization and deserialization methods that take the results of the GreatExpectationsOperator, convert them to JSON, and save to a file on S3. Our custom backend class looks like this:

Our example DAG looks likes this:

When we run this DAG, we will see three XCom files in our S3 bucket, one for each operator. With this implementation, we didn’t need to enable XCom pickling, we can version and access our XCom data easily, and we are not filling up the Airflow metadata database, making this a much more sustainable way of using this popular operator.