Data lineage is the concept of tracking and visualizing data from its origin to wherever it flows and is consumed downstream. Its prominence in the data space is growing rapidly as companies have increasingly complex data ecosystems alongside increasing reliance on accurate data for making business decisions. Data lineage can help with everything from understanding your data sources, to troubleshooting job failures, to managing PII, to ensuring compliance with data regulations.

It follows that data lineage is a natural integration with Apache Airflow. Airflow is often used as a one-stop-shop orchestrator for an organization’s data pipelines, and is an ideal place for integrating data lineage to understand the movement and interactions of your data.

In this guide, we’ll define data lineage, review the OpenLineage standard and core lineage concepts, describe why you would want data lineage with Airflow, and show an example local integration of Airflow and OpenLineage for tracking data movement in Postgres.

Note: This guide focuses on using OpenLineage with Airflow 2. Some topics may differs lightly if you are using it with earlier versions of Airflow.

What is Data Lineage

Data lineage is a way of tracing the complex set of relationships that exist among datasets within an ecosystem. The concept of data lineage encompasses:

If you want to read more on the concept of data lineage and why it’s important, check out this Astronomer blog post.

If you are using data lineage, you will likely have a lineage tool that collects lineage metadata, as well as a front end for visualizing the lineage graph. There are paid tools (including Astro) that provide these services, but in this guide we will focus on the open source options that can be integrated with Airflow: namely OpenLineage (the lineage tool) and Marquez (the lineage front end).

OpenLineage is the open source industry standard framework for data lineage. Launched by Datakin, it standardizes the definition of data lineage, the metadata that makes up lineage data, and the approach for collecting lineage data from external systems. In other words, it defines a formalized specification for all of the core concepts (see below) related to data lineage.

The purpose of a standard like OpenLineage is to create a more cohesive lineage experience across the industry and reduce duplicated work for stakeholders. It allows for a simpler, more consistent experience when integrating lineage with many different tools, similar to how Airflow providers reduce the work of DAG authoring by providing standardized modules for integrating Airflow with other tools.

The following terms are used frequently when discussing data lineage and OpenLineage in particular. We define them here specifically in the context of using OpenLineage with Airflow.

In the section above, we describe what lineage is, but a question remains why you would want to have data lineage in conjunction with Airflow. Using OpenLineage with Airflow allows you to have more insight into complex data ecosystems and can lead to better data governance. Airflow is a natural place to integrate data lineage, because it is often used as a one-stop-shop orchestrator that touches data across many parts of an organization.

These capabilities translate into real world benefits by:

In this example, we’ll show how to run OpenLineage with Airflow locally using Marquez as a lineage front end. We’ll then show how to use and interpret the lineage data generated by a simple DAG that processes data in Postgres. All of the tools used in this example are open source.

For this example, we’ll run Airflow with OpenLineage and Marquez locally. You will need to install Docker and the Astro CLI before starting.

To show the lineage data that can result from Airflow DAG runs, we’ll use an example of two DAGs that process data in Postgres. To run this example in your own environment, you will first need to complete the following steps:

With those prerequisites met, we can move on to the example DAGs. The first DAG creates and populates a table (animal_adoptions_combined) with data aggregated from the two source tables (adoption_center_1 and adoption_center_2). Note that you may want to make adjustments to this DAG if you are working with different source tables, or if your Postgres connection id is not postgres_default.

The second DAG creates and populates a reporting table (adoption_reporting_long) using data from the aggregated table (animal_adoptions_combined) created in our first DAG:

If we run these DAGs in Airflow, and then go to Marquez, we will see a list of our jobs, including the four tasks from the DAGs above.

Then, if we click on one of the jobs from our DAGs, we see the full lineage graph. 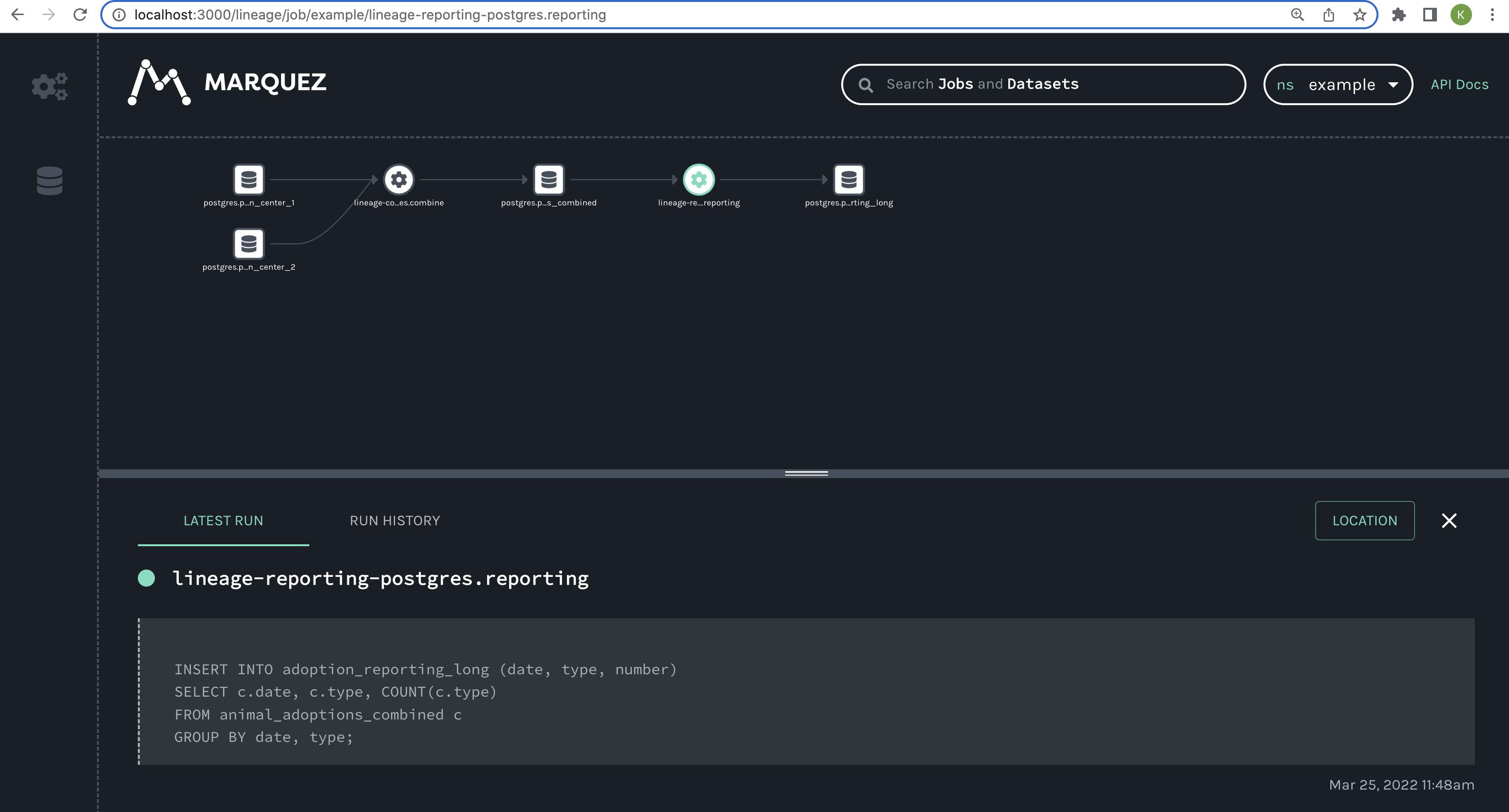 The lineage graph shows us how these two DAGs are connected and how data flows through the entire pipeline, giving us insight we wouldn’t have if we were to view these DAGs in the Airflow UI alone.

For Astronomer customers using Astro, OpenLineage is integrated and available out of the box. The Lineage tab in the Astronomer UI provides multiple pages that can help you troubleshoot issues with your data pipelines and understand the movement of data across your Organization. For more on lineage capabilities with Astro, check out our documentation or reach out to us.

OpenLineage is rapidly evolving, and new functionality and integrations are being added all the time. At the time of writing, the following are limitations when using OpenLineage with Airflow: