Why use Talend and Airflow

Talend is a popular tool for data integration and data management that can be easily used along with Airflow and Astronomer to have the best of multiple worlds for data management.

There are a couple of benefits to using Airflow and Talend together:

In this tutorial we’ll show simple examples that highlight a few ways that Talend and Airflow can easily work together.

How to Execute Talend Jobs with Airflow

There are two easy ways to execute Talend jobs with Airflow:

Each method has pros and cons, and the method you choose will likely depend on your Talend setup and workflow requirements.

The first way of executing Talend jobs from Airflow is using the Talend Cloud API via the SimpleHttpOperator in Airflow. This method is ideal if you have Talend Cloud jobs that do not have downstream dependencies.

Below we will show how to configure your Talend Cloud account to work with the API, and an example DAG that will execute a workflow. If you are unfamiliar with the Talend Cloud API, the documentation at these links are helpful:

Note: The code shown in this example can be found on the Astronomer Registry.

Getting Started with the Talend Cloud API

Getting configured to use the API in Talend Cloud is straight forward. First, make sure the job you want to execute is present in the Talend Management Console as shown below. For this example, we will execute a sample ‘SayHello’ job.

Next, note your job’s Task ID; this will be passed to the API to trigger this specific job.

Finally, ensure your user has a personal access token created. This is required for authenticating to the API. To create one, under your user go to Profile Preferences, then Personal Access Tokens, and then add a token.

That’s all you have to do on the Talend side! Now you can move on to creating an Airflow DAG to execute this job.

Using the Talend API with Airflow

Using Airflow to interact with the Talend Cloud API is easy using the SimpleHttpOperator. In this example we will show how to execute a job; however, note that there are many other actions you can perform with the Talend API as described in the documentation linked above, and all of these can be accomplished in a similar way. Also note that there are other ways of making an API call in Airflow besides using the SimpleHttpOperator; we have chosen to show this operator because it is the most straight forward for this use case.

Note: In Airflow 2.0, provider packages are separate from the core of Airflow. If you are running 2.0 with Astronomer, the HTTP Provider package is already included in our Astronomer Certified Image. If you are not using Astronomer, you may need to install the package separately to use the hooks, operators, and connections described here. To learn more, read Airflow Docs on Provider Packages.

First, we need to set up an Airflow connection to connect to the API. The connection should be an HTTP type, and should be configured like this:

The host name should be the Talend Cloud API URL. This can vary depending on which region your account is hosted in and may not be the same as the one shown above. The extras should contain your authorization string, with ‘Bearer’ followed by your personal access token.

Next we can create our DAG.

This DAG has a single SimpleHttpOperator that will send a POST request to the Talend API to trigger our job. Ensure you enter the http_conn_id as the connection created above. The endpoint should be the Talend Cloud API executions endpoint for your region. And the data is the body of the request, and needs to contain the executable, which is the Task ID described in the previous section formatted in json.

Now if you run this DAG in Airflow, you should see a successful log that looks something like this:

And looking at the Talend Management Console, you can see the job is running: 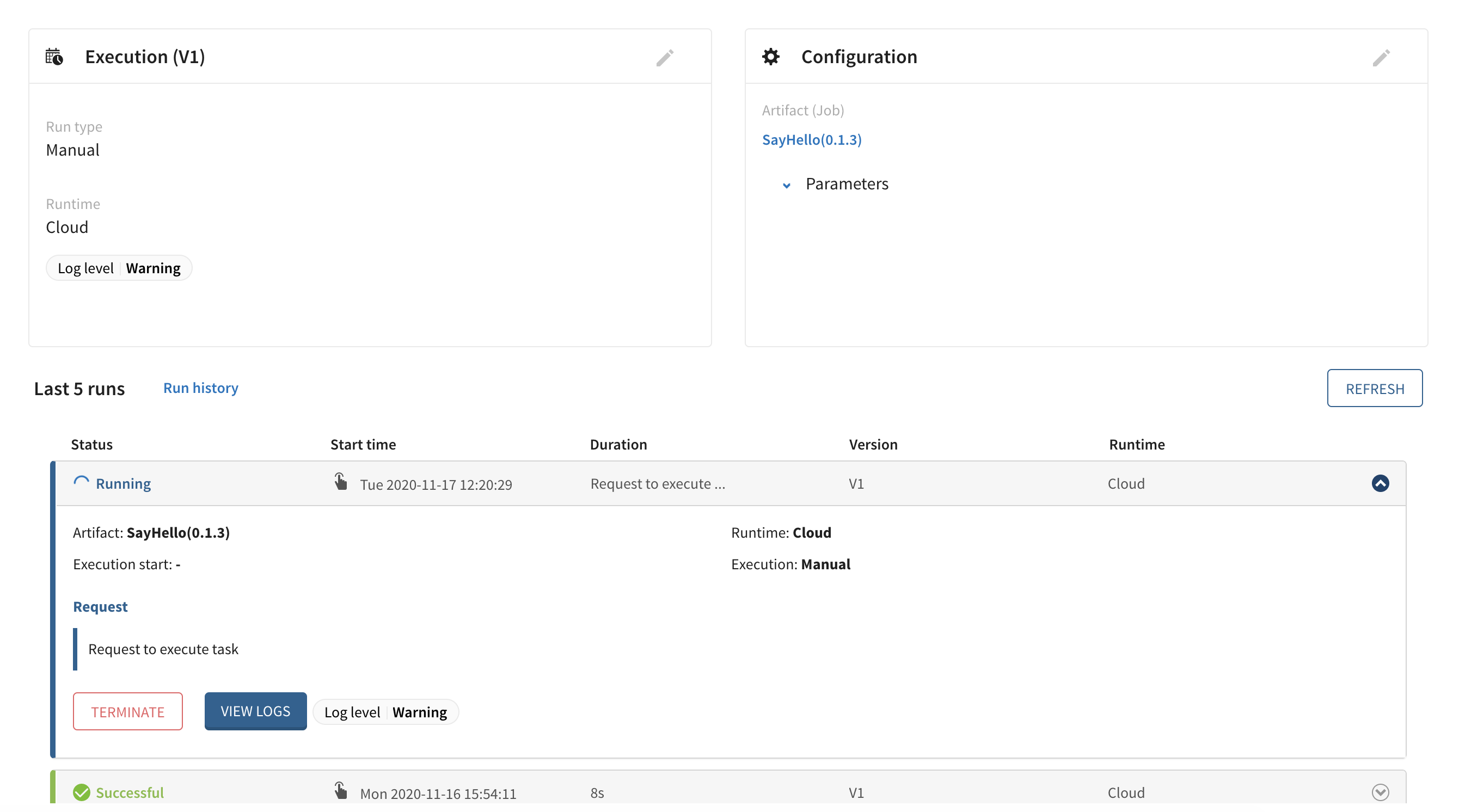 Finally, note that because the API call will simply trigger the job, the Airflow task will be marked successful as soon as a response is received from the API; this is not tied to when the job actually completes, so if you have downstream tasks that need the Talend job to be complete you will either have to use another method like the KubernetesPodOperator described below, or design your workflow in another way that manages this dependency.

The second way to execute Talend jobs with Airflow is to containerize them and execute them from Airflow using the KubernetesPodOperator. This is a good option if you are using Talend studio, and if you have tasks that are dependent on your Talend jobs completing first.

Here we’ll show how to containerize an existing Talend job, and then execute some containerized jobs with dependencies using the KubernetesPodOperator in Airflow.

Note: The code shown in this example can be found on the Astronomer Registry.

Existing Talend jobs and can be can be containerized with docker and pushed to a repository with the Talend Studio. To start go to Talend studio, find the job you would like to containerize, and select the publish feature from the right-click menu. 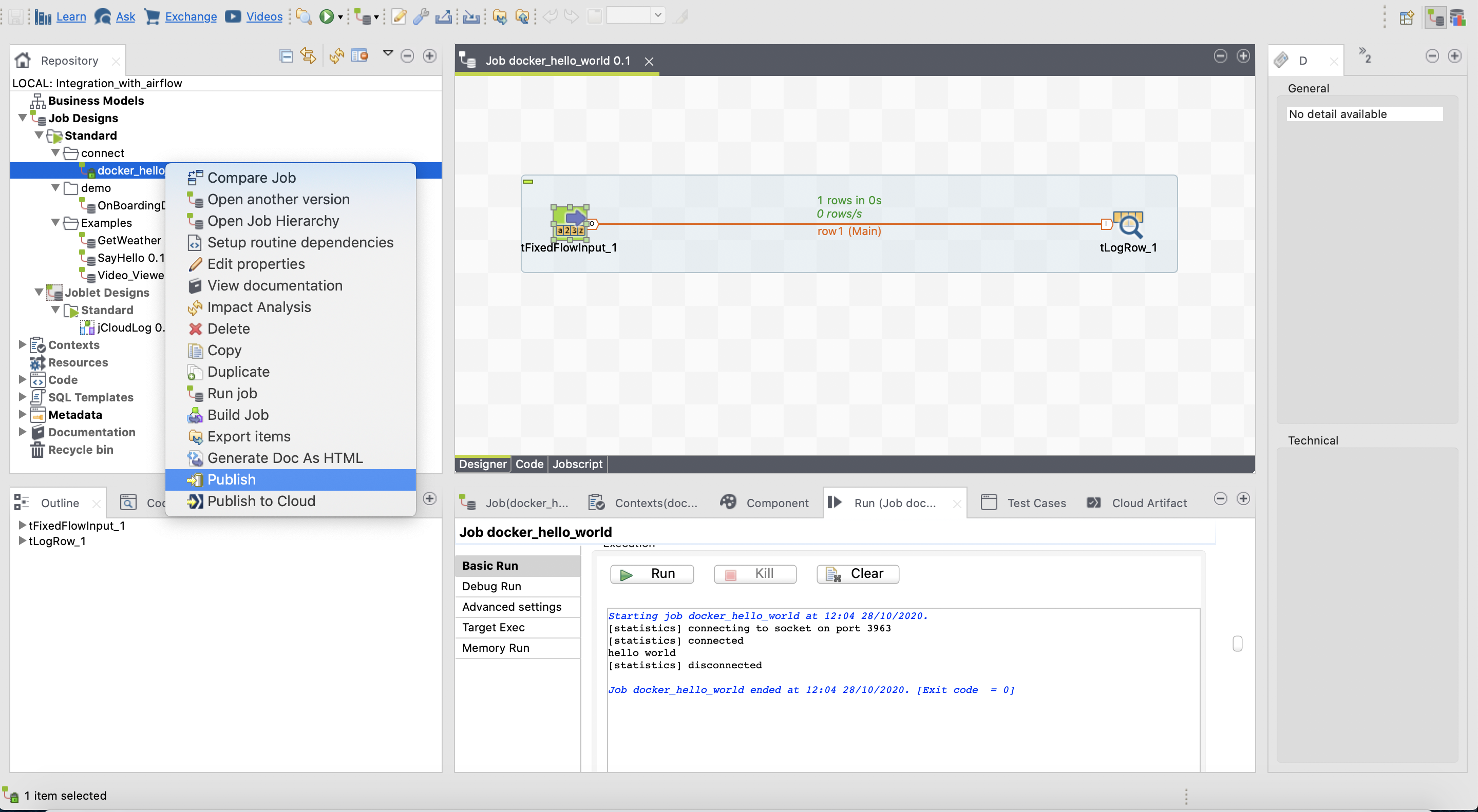 Once clicked a publish job pop up will come up. Select Docker image as the ‘Export Type’ to publish the job as a docker image. 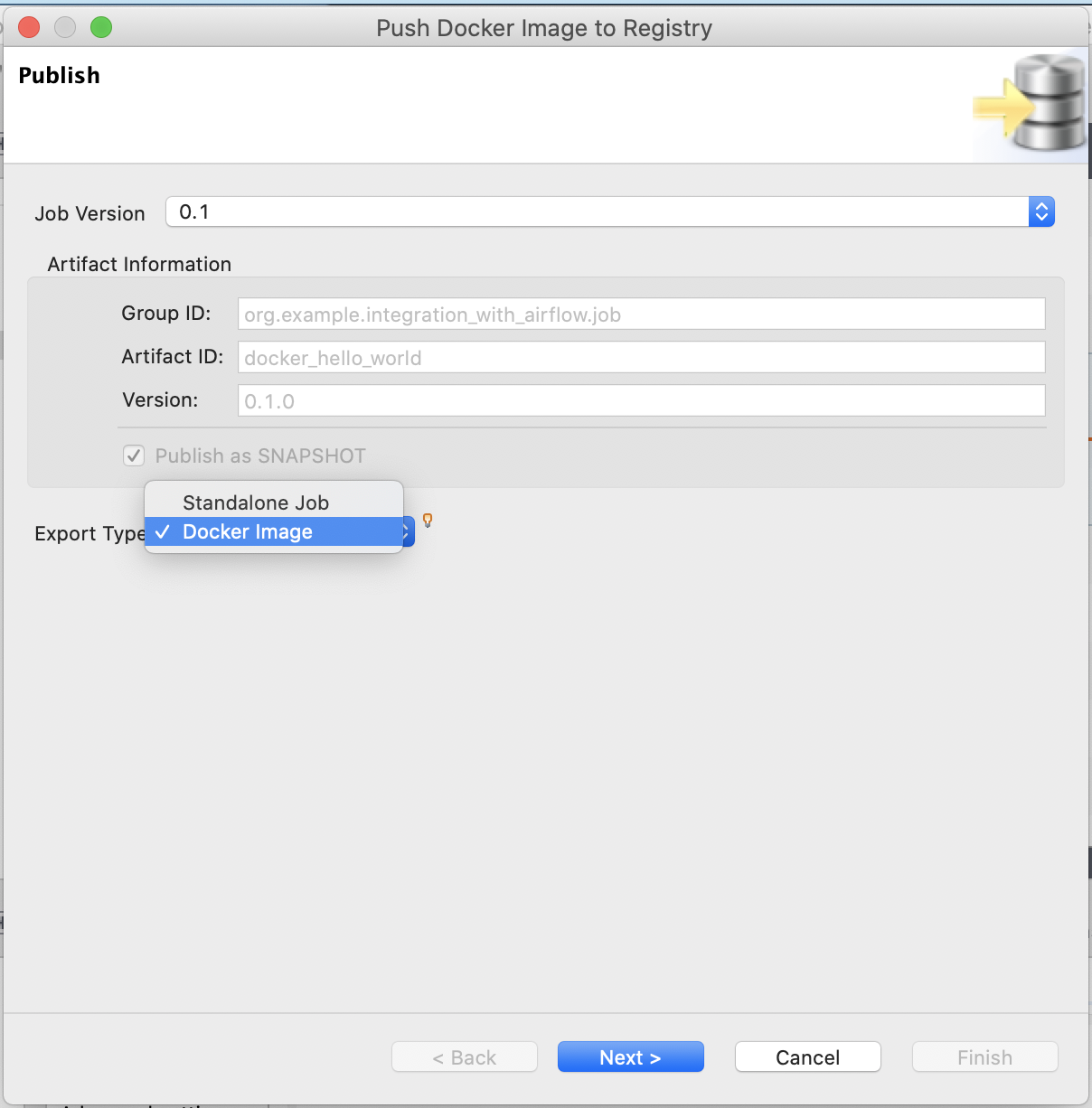 Select next to set up your connection between Talend and your registry. In this example the job is being published to DockerHub and being built with a local Docker host. If you are using a remote Docker host, you will need to find the IP address Docker is running on and use TCP to connect. For example put tcp://<docker-host-ip> in the input box to the side of ‘Remote’.

Specifics on how the parameters need to connect to your registry are shown below.

<Image name> the name of your repository (talendjob)

<Registry> Where the registry is located (docker.io/davidkoenitzer)

When you select ‘Finish’ the job will be converted into Docker image and pushed to the indicated registry. In this example the job was pushed to https://hub.docker.com/repository/docker/davidkoenitzer/talendjob

Talend can also publish jobs to Amazon ECR, Azure ACR, and Google GCR. Use this guide from Talend for connection parameter specifics https://www.talend.com/blog/2019/03/12/how-to-deploy-talend-jobs-as-docker-images-to-amazon-azure-and-google-cloud-registries/ 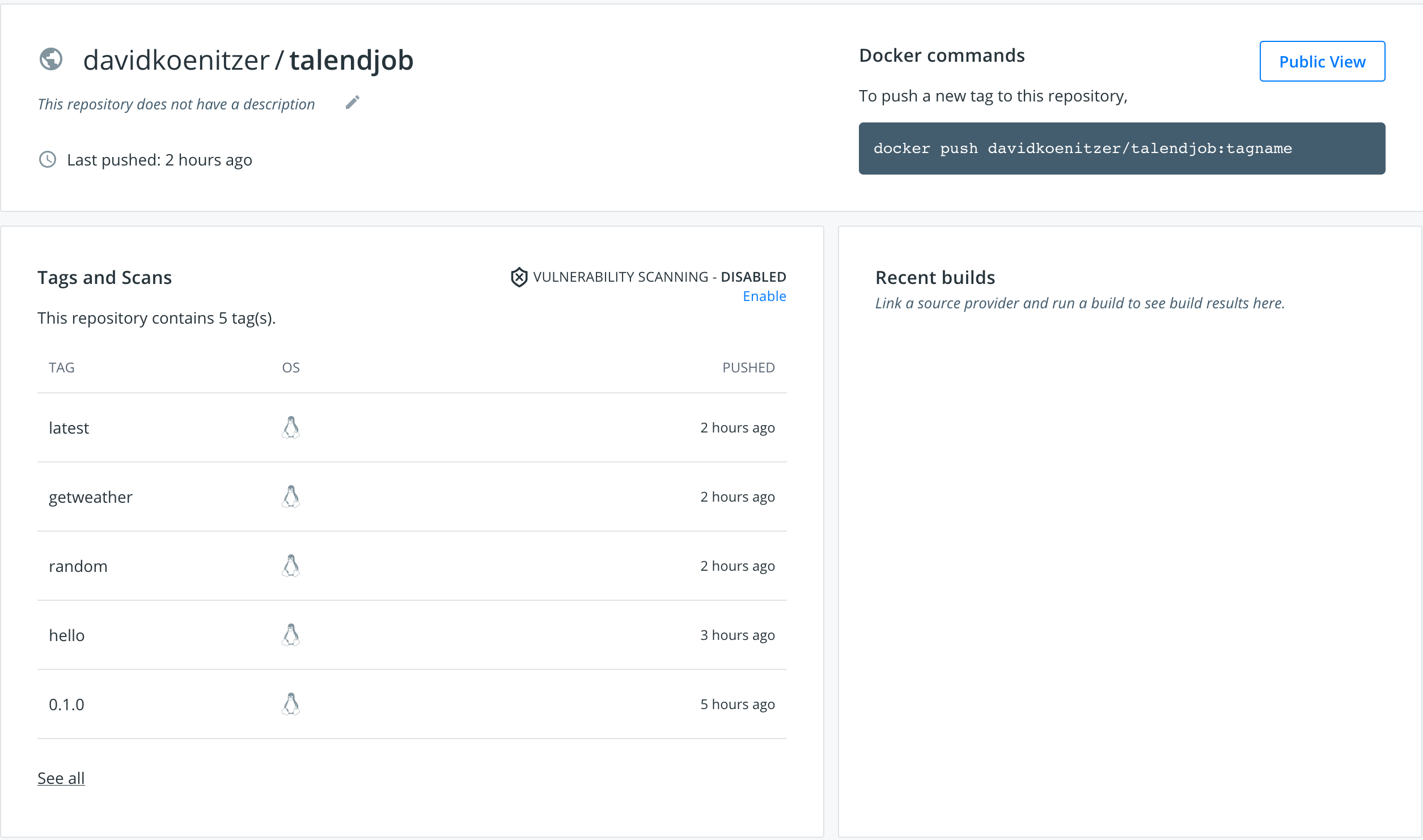 You can now run this job locally by running:

If you ran the command on the terminal you should see the output hello. Now you should be able to pull and run this image from Airflow.

Once your Talend jobs are containerized and pushed to a registry, you can move on to creating a DAG that will orchestrate them. To do so we will mainly use the KubernetesPodOperator. If you are not familiar with how this operator works, this is a great starting place for documentation.

For this example, we are going to create a DAG that will execute two Talend jobs, one of which is dependent on the other, and then send an email notification if the jobs are successful. The full DAG code is copied here:

The first half of the code simply imports packages and sets the DAG up to work with Kubernetes. Then, after we define the DAG, we get to the task definitions. Each Talend job is one task using the KubernetesPodOperator. In this case we have two tasks for two Talend jobs, talend1 and talend2.

In each task, the image is the name of the image of the containerized job saved to a registry as described above. Note that in this example we use an image from DockerHub (i.e. a public registry); by default this is where the KubernetesPodOperator looks for the provided image name. If instead you want to pull an image from a private registry (e.g. ECR, GCR, etc.), the setup looks a little different. Refer to this documentation for details.

Since this example is very simple we don’t need to provide any arguments, cmds, etc. to run the image. But if needed, these can all be specified in the operator.

Finally, we define a send_email task to notify us that the tasks completed successfully. Then, the final lines of code define task dependencies.

Now, if we deploy this code to Astronomer and check out the Airflow UI, we should see a DAG that looks like this:

If we run the DAG, any output from the containerized Talend jobs should be printed in the Airflow logs for that task. In this case, our first Talend job prints ‘hello world’, and our second prints a series of random strings. Looking at the task logs we should see: 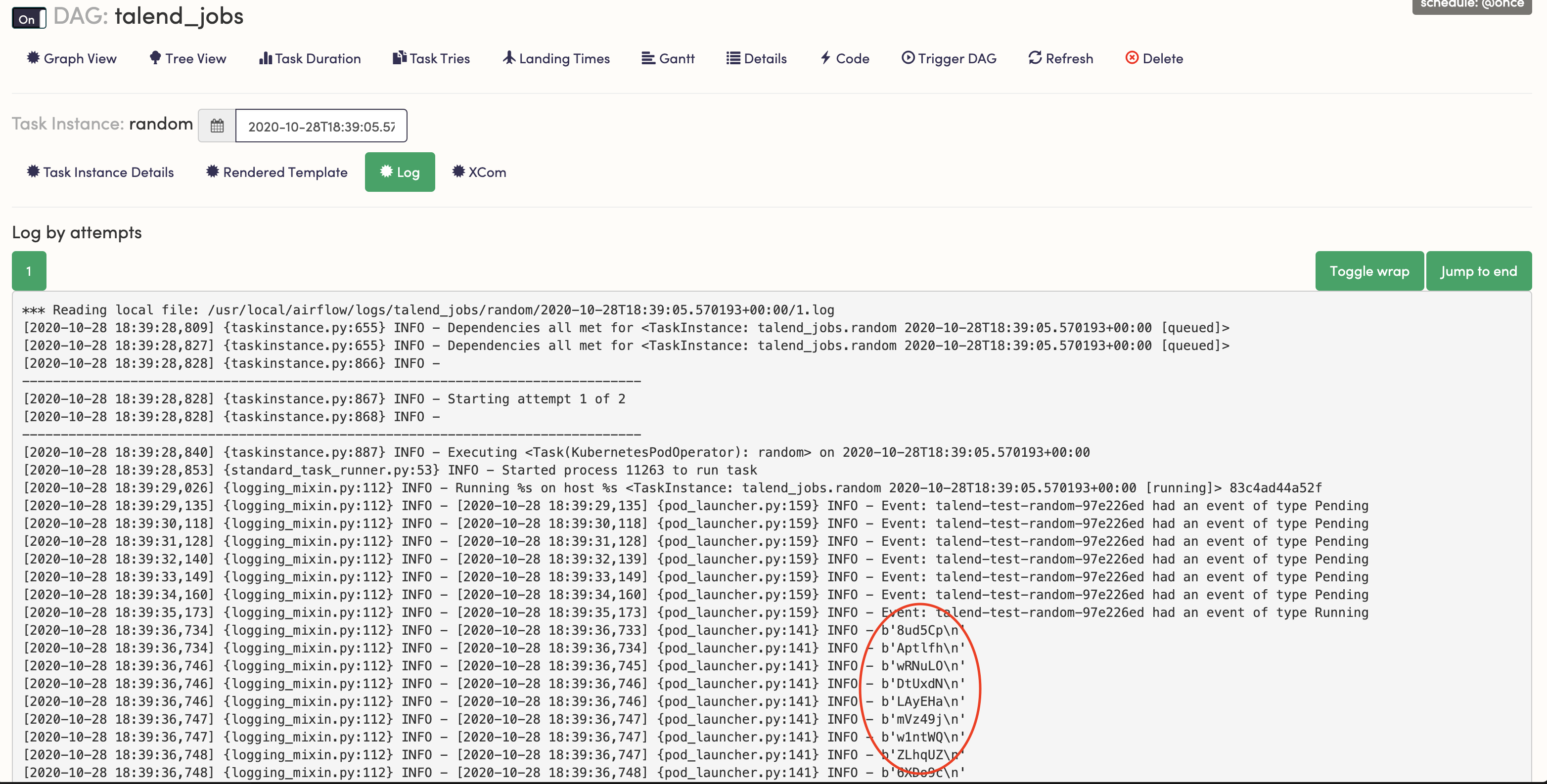 Pretty straight forward! Once your Talend jobs are containerized, they can be orchestrated using Airflow in any sort of DAG needed for your use case, by themselves, with other Talend jobs, with any other Airflow tasks, etc.

If you are getting an error that says Cannot run program "docker-credential-desktop" while building an image from a job using a local docker host on Mac then it may be due to an outdated Java plugin on Talend Studio V7.3.1

This will stop the error from happening when building images from Talend jobs with your local docker host.

Note that if you are running the specific example DAG provided above in the KubernetesPodOperator section, SMTP will need to be configured on your Airflow instance in order for the send_email task to work. This requires an SMTP server that will allow a credentialed application to send emails. If you have that, it is simply a matter of configuring the following Airflow Environment variables:

Note: values shown here are for example only. Fill in everything with your SMTP info.